In January 1992, a freighter crossing the Pacific from Hong Kong to Tacoma, Wash., ran into rough weather near the International Date Line. As the ship heaved through the storm-tossed seas, several cargo containers on deck—including one filled with tens of thousands of plastic tub toys—came loose, fell overboard, and broke apart. Seven months after the spill, the plastic ducks, beavers, turtles, and frogs began washing up on beaches. Scientists who track ocean currents were ecstatic. 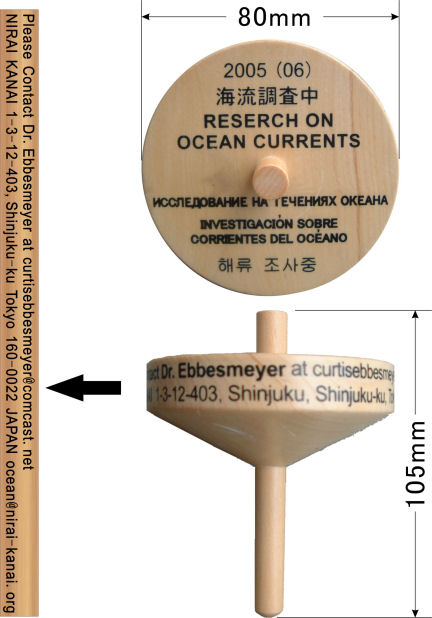 Even today, additional members of the tub-toy armada occasionally make landfall. The date and place of each of the nearly 1,000 toys recovered to date provide a data point, says Curtis Ebbesmeyer, a retired oceanographer in Seattle. Some of the toys are well traveled indeed—one frog washed ashore in Scotland, and a duck turned up near Maine. However, most of the drifters have remained stuck in the Pacific Subarctic Gyre, a set of deepwater and surface currents spanning an area the size of the continental United States that generally flows counterclockwise around the northern Pacific Ocean.

Worldwide, about 10,000 cargo containers fall overboard each year. In most parts of the world, the dispersal of flotsam isn’t of major interest to researchers. But along the bustling trade routes that link eastern Asia to North America, the tennis shoes, kids’ sandals, hockey gloves, and other stuff that drops off ships is enabling scientists to fill in details of how the Pacific Subarctic Gyre works.

Often, the lost items float and can be readily identified as coming from a ship at a certain location. Recently, Ebbesmeyer and his colleagues used almost a century of data from such floating objects to map the gyre’s major subcurrents and swirls.

Now, for the first time, scientists have determined that a lap around the Pacific Subarctic Gyre takes about 3 years. That information, in turn, led Ebbesmeyer and his colleagues to identify long-term variations in water temperature and salinity in the North Pacific that hadn’t been noted previously.

All this from studying flotsam.

The ocean is teeming with a variety of scientific instruments. When it comes to measuring surface currents, however, these devices have their limitations.

For example, in the past 7 years, scientists have deployed about 2,800 heavily instrumented, satellite-monitored probes called Argo floats (SN: 2/1/03, p. 75: Available to subscribers at Electronic Jetsam). They drift through the ocean at depths of about 2 kilometers. Every 10 days or so, they pop up to measure the overlying water’s temperature and salinity. However, the direction and speed of deep currents, where these high-tech probes spend most of their time, don’t necessarily match those of currents in the top few meters—let alone centimeters—of ocean, says Ebbesmeyer. So, the path of an Argo float provides little information about surface currents.

Probes specifically designed to ride surface currents face different problems. Their sensors can quickly become obstructed by algae, barnacles, and other organisms that thrive in the sunlit portion of the ocean.

What’s more, regardless of the depths at which modern probes operate, their batteries fail within months. Generally, the probes haven’t traveled more than 1,000 km in that time, says Thomas C. Royer, an oceanographer at Old Dominion University in Norfolk, Va. That’s only a small fraction of the path around the gyre.

“We’ve never had a good handle on how long it takes [floating] objects to go around the gyre, or even if they do,” Royer adds.

To map the currents and clock their speeds, Ebbesmeyer, Royer, and their teammates circumvented the disadvantages of modern electronic probes by harnessing the power of floating junk. Because the Pacific is crisscrossed by major trade routes, “there’s a lot of stuff out there,” Ebbesmeyer notes. Many of those items can be traced back to specific spills, and if the lost objects are durable, they can drift in currents for years.

Take, for instance, a container that dropped overboard in the North Pacific in May 1990. It held 80,000 Nike sneakers—each of which carried a code number unique to its shipment. About 2,000 of those shoes have turned up on beaches since then. Ebbesmeyer’s group stays in touch with networks of beachcombers who report finds from ship spills.

In January 2000, a cargo box contributed another batch of accidental tourists. It contained children’s sandals that, like the sneakers, carried code numbers linking them to the particular shipment. Ten of the sandals have washed ashore on Alaska’s Kodiak Island—some in 2001, others in 2005. None showed up in the intervening years.

The flotsam-recovery database that Ebbesmeyer and his colleagues maintain also includes information from some of the 19,000 beer bottles—containing identification numbers and contact information—that oceanographers threw off a boat far out in the Gulf of Alaska between 1956 and 1959. The last recording of one of these bottles washing ashore was in 1972, says Ebbesmeyer.

The team’s oldest data points—and the most ecofriendly—result from the eruption of Alaska’s Mount Katmai on June 6, 1912. Some of the pumice spewed by that volcano fell into the Gulf of Alaska. In mid-August 1914, large chunks of that frothy rock, waterlogged but still floating, washed up on beaches of British Columbia’s Queen Charlotte Islands.

Each entry in the researchers’ flotsam database includes the latitude and longitude of the place where the item entered the ocean and of the site where it was discovered—in essence, a start point and an end point. “You use a lot of imagination about what goes on in between,” says Royer.

For most of its years at sea, flotsam in the gyre wouldn’t have been directly affected by winds, the scientists speculate. The message-containing beer bottles were heavy and typically drifted on their sides, the waterlogged pumice rode low in the water, and the sandals and sneakers floated upside down with their soles barely exposed. The tub toys originally floated with a high profile, as they were designed to do, but after just a few weeks in the open ocean, they’d have sprung leaks and barely remained afloat, says Ebbesmeyer.

Because of the sheer volume of flotsam data, the scientists have been able to discern the typical configuration and average speed of the currents in the Pacific Subarctic Gyre, even though their overall pattern continually shows slight shifts and speed changes in response to the passage of large ocean eddies (SN: 6/14/03, p. 375: Available to subscribers at Oceans Aswirl) or variations in weather patterns caused by climate cycles such as El Niños.

Results of computer simulations indicate that floating objects can be swept along several paths in the Pacific Subarctic Gyre, Ebbesmeyer and his colleagues noted in the Jan. 2 Eos. The easternmost portions of all routes flow north along the Alaskan panhandle and then turn west to skirt the state’s southern coast. Items following the shortest route, a 7,400-km loop, are carried a little more than halfway out the chain of Aleutian Islands before they are swept back to the West Coast.

Currents along the next-longest path, a 10,200-km route, tour all the Aleutians before returning east. The longest paths, which stretch all the way to the Russian coast, measure 12,600 km and 13,500 km.

An item following the shortest loop would make a circuit in just over 2 years, the researchers estimate, and items taking the longest route would make a lap every 3.6 years. The average trip around the gyre took 3 years. This conclusion fits with observations of recoveries of items that came at intervals of several years rather than being spread evenly through time.

According to the simulations, current speeds in the gyre range between 11 and 13 cm per second, or about one-fifth the speed of a typical human swimmer.

Once the researchers came up with these answers, they analyzed long-term records of water temperature and salinity at various sites in the North Pacific. They observed 3-year-long cycles in the data—”a pattern nobody noticed until the ducks came along,” says Royer.

Studying the dispersal patterns of flotsam is “interesting and creative,” says Howard J. Freeland, an oceanographer at the Institute of Ocean Sciences in Sidney, British Columbia. However, he cautions, the date of recovery of an item found on a beach may not reflect when it actually washed ashore, especially for flotsam found on remote areas of the North Pacific. Ebbesmeyer and his colleagues “have good measurements, but I’m not sure of what,” he notes.

The flotsam-researchers’ techniques may not seem scientifically rigorous, comments Richard Thomson of the institute in Sidney. However, he adds, “with oceanographers, the more data, the better. … [Studying flotsam] is one of the few ways to get it.”

The findings add to the overall knowledge of currents within the North Pacific, he notes.

New entries to the team’s flotsam database are undoubtedly forthcoming, and some will be less serendipitous than beachcombers’ reports of washed-up sandals. For example, a Japanese donor interested in the flotsam research provided $100,000 for researchers to release 500 wooden tops—and a buoy that can be tracked by satellite—into the ocean off Okinawa every 2 months during a 2-year period that began in 2005.

Each top is stamped with Ebbesmeyer’s name, home address, and e-mail address, so that people who find the tops can report their discoveries. Beachcombers in Japan have already recovered a few dozen of the tops. However, trans-Pacific currents aren’t fast enough to have driven any tops to North American shores yet.

Nevertheless, Ebbesmeyer urges people to take a good look around next time they head to the shore. He notes, “There’s a lot of scientific information just lying on the beach.”

To report interesting items of flotsam that have washed ashore, send an e-mail to Curtis Ebbesmeyer at curtisebbesmeyer@comcast.net or a letter to him at:

Be sure to include a description of the item, the circumstances of its discovery (location, date, weather conditions, etc.), and pictures of the item if possible.

Detailed information about the release of wooden tops off Japan in 2005 and 2006 can be found at http://www.gondo.com/g-files/koma/page_1.htm. For a close look at one of the tops, see the image below.

During their time at sea, the ink on the tops may have faded or disappeared. If you find one of these tops, report it to Curtis Ebbesmeyer as described above. Also, send a similar report to Masakatsu Gondo via e-mail at koma@gondo.com or via letter to the following address: