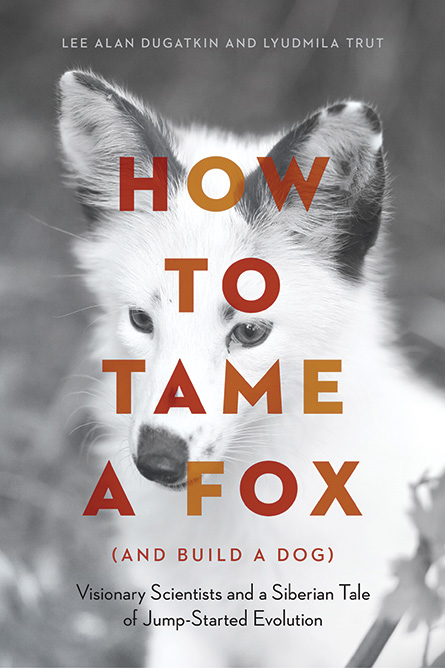 How to Tame a Fox (and Build a Dog)
Lee Alan Dugatkin
and Lyudmila Trut
Univ. of Chicago, $26

In 1959, Lyudmila Trut rode trains through Siberia to visit fox farms. She wasn’t looking for furs. She needed a farm to host an audacious experiment dreamed up by geneticist Dmitry Belyaev: to create a domestic animal as docile as a dog from aggressive, wily silver foxes.

Evolutionary biologist Lee Alan Dugatkin helps Trut recount this ongoing attempt to replay domestication in How to Tame a Fox. The mechanics of domestication are still a matter of intense scientific debate. Belyaev’s idea was that ancient humans picked wolves and other animals for docility and that this artificial selection jump-started an evolutionary path toward domestication.

Back in the 1950s, testing the idea was dangerous work, and not just because untamed foxes bite. In 1948, the Soviet Union, under the scientific leadership of Trofim Lysenko, outlawed genetics research. Lysenko had risen to power based on fabricated claims that freezing seeds in water could increase crop yields. “With Stalin as his ally, he launched a crusade to discredit work in genetics, in part, because proof of the genetic theory of evolution would expose him as a fraud,” Dugatkin and Trut write. Geneticists often lost their jobs, were jailed or even killed, as was Belyaev’s own brother. So Belyaev cloaked his domestication experiments in the guise of improving the fur-farming business.

Fox researchers started by testing the temperament of about 100 silver foxes each year. About a dozen of the foxes, slightly calmer than most, were bred annually. Within a few generations, some foxes were a bit more accepting of people than the starting population. That small difference convinced Belyaev of the experiment’s promise, and he recruited Trut to carry out a larger breeding program.

After choosing a farm, in 1960, Trut brought a dozen calm foxes from the preliminary project, including two that would let her pick them up. She also chose the calmest 10 percent of the foxes at the new farm for breeding, both to increase the number of animals and to increase genetic diversity. Eventually, she began breeding aggressive foxes as a comparison group for the tame ones.

Trut and Dugatkin lovingly recount some of the experiment’s milestones, including the first fox born with a wagging tail and the first one with droopy ears — two hallmarks of domesticated animals. Trut recalls the foxes she’s lived with and, heartbreakingly, the ones she lost, or had to sacrifice to keep the experiment going after the collapse of the Russian economy in 1998 led to funding problems. At every step, the authors skillfully weave the science of domestication into the narrative of foxes becoming ever-more doglike.

Trut has kept Belyaev’s dream alive for nearly 60 years. Now in her 80s, she still runs the experiment and has eagerly collaborated with others to squeeze every drop of knowledge from the project. The work has shown that selecting for tameness alone can also produce a whole suite of other changes (curly tails, droopy ears, spotted coats, juvenile facial features) dubbed the domestication syndrome. With the help of geneticist Anna Kukekova, Trut is searching for the genes involved in this process.

The project now sells some of the foxes as pets to raise money, although one could argue they aren’t fully domesticated. The foxes may wag their tails and flop on their backs to get their bellies rubbed, but Trut says they still don’t follow commands like dogs do. It probably took Stone Age humans hundreds or thousands of years to domesticate wolves. The silver fox experiment has replayed the process in fast-forward. It may speed scientists’ quest to understand the DNA changes that transformed a wolf into a dog.

Buy How to Tame a Fox (and Build a Dog) from Amazon.com. Sales generated through the links to Amazon.com contribute to Society for Science & the Public’s programs.