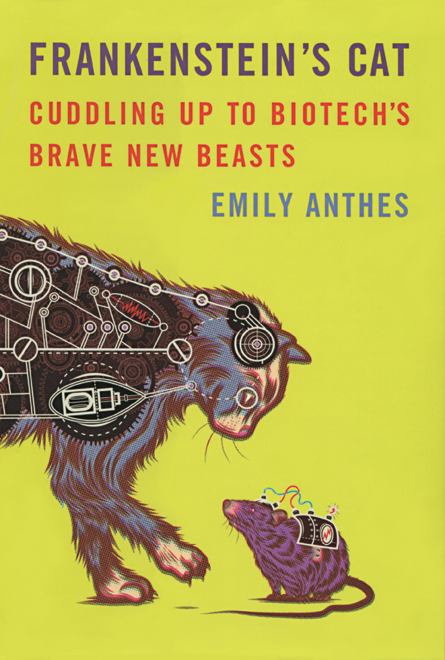 Artemis may look like any other goat, but a little human DNA inserted into her genetic code gives her life-saving potential. This University of California, Davis wonder produces milk rich in the bacteria-busting enzyme lysozyme, a compound that could help prevent some of the hundreds of thousands of deaths from diarrhea worldwide each year.

“Science has given us a whole new toolbox for tinkering with life,” writes journalist Anthes. Frankenstein’s Cat shows off just a small sampling of this humanmade (or at least human-modified) menagerie. Some, like Artemis, are the result of genetic editing. Others are biomechanical: Anthes meets scientists who are wiring insects’ brains to steer them like remote-controlled cars and building a prosthetic tail for a wounded dolphin.

People don’t always embrace these Frankenanimals. Just ask Aqua­Bounty, a Massachusetts-based firm that’s been trying to get its fast-growing genetically modified salmon onto American dinner plates for more than 15 years. And it’s tough to share Anthes’ gee-whiz enthusiasm when some of the proposed projects seem like Band-Aids to fix bad human behavior. Cloning species on the brink of extinction, for instance, will do little good if their habitats are now housing developments.

Still, Anthes does an admirable job addressing the thorny ethical issues behind altering animals’ bodies and minds, whether mechanically or genetically. “Biotechnology is not inherently good or bad; it is simply a set of techniques,” she writes, “and we have choices about how we employ them.”