Three decades and 135 flights after its first launch, the space shuttle is ending its reign. After the final orbiter, Atlantis, touches down — on a trip scheduled to begin no earlier than July 8 — NASA will officially close the books on the shuttle program. For the near term, the agency will buy seats aboard Russian Soyuz spacecraft to get U.S. astronauts to the International Space Station. For the long term, private businesses are trying to develop ways to fly crews into low-Earth orbit, as NASA focuses on designing a new heavy-lift rocket to take astronauts deeper into space.

Science was never the driving goal for the shuttle, which NASA conceived of as a cheap and routine way to get astronauts and supplies to space. Yet along the way researchers took advantage of the shuttle’s journeys, by having astronauts launch and regularly upgrade the orbiting Hubble Space Telescope, for example. Some 2,300 experiments have flown aboard shuttles, most focusing on how materials and organisms behave differently in very-low-gravity environments.

Though the shuttle program is ending, research in space continues. The 16 countries that operate the space station plan to keep it going as an orbiting laboratory through at least 2020.

April 1981: Shuttle Columbia becomes the first to fly into orbit.

November 1983: First flight of Spacelab, a reusable laboratory for microgravity research developed by the European Space Agency. It was carried on about two dozen shuttle missions in various permutations. 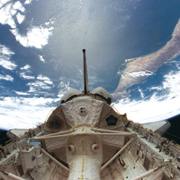 Materials and biological research
Early on, Spacelab (shown in this fish-eye view) flew in the shuttle’s payload bay. In microgravity, researchers have found, proteins crystallize at different rates and at different sizes than on Earth, suggesting new ways to develop drugs. Infectious bacteria become more virulent, leading to other ideas for medicines and vaccines. And flames burn and spread differently, a finding that has helped NASA develop new methods for fighting fires on spacecraft.

January 1986: Challenger explodes 73 seconds after the launch of its 10th mission, derailing flights until fall 1988.

May 1989: Atlantis launches the first space probe from a shuttle: Magellan, a mission to Venus. 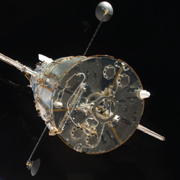 Astronomy
For pure scientific return, no other shuttle-related research can compete with the Hubble Space Telescope (shown). It has peered at galaxies dating back more than 13 billion years, helped discover that the universe is rushing apart at an ever-faster rate and sent back jaw-dropping images of newborn stars swaddled in dust. During five shuttle missions, astronauts swapped out old instruments for new ones on Hubble, giving it a new lease on life each time. Other “Great Observatories” deployed from the shuttle include the Compton Gamma-Ray Observatory (1991) and the Chandra X-ray Observatory (1999).

October 1990: Discovery launches the Ulysses probe to the sun.

June 1995: Atlantis becomes the first shuttle to dock at Russia’s Mir space station, where U.S. astronauts conduct experiments, such as investigating the effects of spaceflight on bone loss, over several visits.

Neuroscience
Neurolab tackled brain development, plasticity, motor balance and other neural systems. Researchers learned, for instance, that cells in the inner ears of rats made more connections in microgravity than on Earth, and that parts of the rat brain receiving balance signals changed during a 16-day spaceflight. Findings from such basic studies may offer insight into brain-related problems such as Alzheimer’s disease and motion sickness.

December 1998: Construction begins in space on the International Space Station, meant to provide a permanent platform for research in orbit.

February 2000: Endeavour flies a radar mission that gathers the most detailed information to date about Earth’s topography. 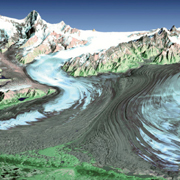 Remote sensing
From a few hundred kilo­meters below most Earth-observing satellites, shuttle astronauts have taken shots of haze from volcanic eruptions, hurricanes powering across oceans and urban sprawl blighting the landscape. In 2000, the Shuttle Radar Topography Mission compiled the first detailed global map of the Earth’s topography (generating this view of Alaska’s Malaspina Glacier). 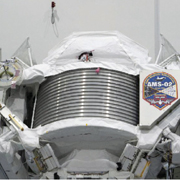 Particle physics
Essentially a giant orbiting magnet, the Alpha Magnetic Spectrometer (shown) will measure the mass, charge and speed of particles flying through the cosmos in search of evidence for dark matter and other exotic matter. Its most groundbreaking work may be serendipitous discoveries that scientists cannot yet imagine, says its developer, MIT physicist Samuel Ting.

December 2011: SpaceX, a private company based in Hawthorne, Calif., intends to fly its Dragon capsule to the International Space Station as a proof of principle for future commercial spaceflights.

1. The orbiter, roughly 37 meters long and weighing as much as 80 metric tons, houses the crew and the payload bay, where cargo is packed. NASA has built six orbiters, five of which have flown in space. Orbital altitudes typically reach 300 to 500 kilometers and speeds are roughly 28,000 kilometers per hour.

2. The solid rocket boosters provide the shuttle, weighing 2,000 metric tons at launch, with lift for the first two minutes of flight. Before the shuttle reaches an altitude of 50 kilometers, the spent boosters are jettisoned; later they are recovered from the ocean for reuse.

3. The external tank contains the fuel for the main engines, about 720 metric tons of liquid oxygen and liquid hydrogen. It is released once the main engines are shut off and then breaks apart in the Earth’s atmosphere.