View a video of the quark-gluon soup

WASHINGTON — Talk about hot and heavy. Scientists have taken the temperature of a minuscule glob of dense, hot matter formed in the grisly aftermath of collisions between gold atoms traveling near the speed of light. The material reaches an estimated 4 trillion degrees Celsius, about 250,000 times hotter than the sun’s interior, and higher than any temperature ever reached in a laboratory, researchers reported February 15 at a meeting of the American Physical Society.

The measurements, which will be published in an upcoming Physical Review Letters, provide a more detailed description of the superhot, superdense soup of matter called quark-gluon plasma, which may mimic the conditions of the infant universe, the researchers say. Other studies of the soup hint that discrete pockets of the matter break special kinds of symmetry.

In the new study, gold ions were smashed inside an underground 2.4-mile-circumference track at Brookhaven National Laboratory’s Relativistic Heavy Ion Collider  on Long Island. The messy collisions were so energetic that they caused protons and neutrons to melt, sending their constituent particles, known as quarks and gluons, into the fray. 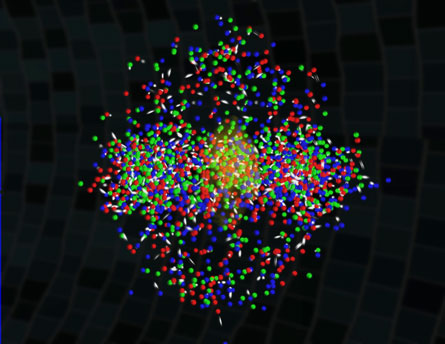 The resulting material, called quark-gluon plasma, was tentatively reported at RHIC several years ago. By taking its temperature, RHIC researchers confirmed that the material consists of protons and neutrons melted into their constituent quarks and gluons. The new temperature reading also “tells us which point in the universe’s history we are probing,” says Steven Vigdor, a member of the research team at Brookhaven.

“We hope experiments of this kind give windows into new phases of matter,” comments physicist Chris Quigg of the Fermi National Accelerator Laboratory in Batavia, Ill., who was not involved in the work. “There is something new to study.”

The gold-gold collisions created a blob of the material that was about a trillionth of a centimeter across, and existed only for a little more than a trillionth of a trillionth of a second. So scientists couldn’t stick a thermometer in it, says Barbara Jacak of Stony Brook University in New York, who worked on the temperature measurement.

Instead, Jacak and colleagues detected photons—packets of light—as they moved away from the newly formed material, to see how hot the material was. Just as a hot iron rod turns from red to yellow to white as it heats up, light coming from the material changes properties depending on how hot it is. “The shine is brightest when the matter is hottest,” Jacak says.

Detectors caught the photons as they flew away from the hot, dense material. The average temperature, based on about a billion collisions, was measured at about 3 trillion degrees Celsius, Jacak says. By running theoretical models backward, the scientists deduced that the soup reached 4 trillion degrees soon after it was created.

The newly measured temperatures provide very strong evidence that the substance is indeed a quark-gluon plasma, which earlier experiments had indicated. This quark-gluon soup may share properties with the unbelievably hot, dense matter that pervaded the universe soon after the Big Bang.  The quark-gluon plasma created at RHIC may give physicists a new way to explore properties of the early universe.

Although the substance is called a plasma, in some ways it behaves more like a liquid than a plasma or a gas. “We are extremely anxious to find out how this works,” Jacak says. “Why is it a liquid?” Jacak points out that the coldest matter on Earth, also created in labs, flows in the same way as the hottest matter (SN: 4/25/09, p. 26).

The new study establishes that the protons and neutrons have melted, but detailing the soup’s precise ingredients poses “a fascinating question,” Quigg says. “There are many phases. We don’t know yet the degree to which these are separate.”

In other experiments, the scientists found hints of a special kind of symmetry breaking in the force that binds quarks into protons and neutrons. Physicists theorized that at extreme temperatures where matter changes forms, just the conditions when RHIC’s gold ions collide, asymmetrical “bubbles” might be formed, breaking the symmetry in the strong nuclear force. The RHIC results hint that asymmetrical bubbles form for all but head-on collisions of gold ions, suggesting left-right symmetry breaking.

A different kind of asymmetry may explain why the universe is populated mostly with matter rather than equal amounts of matter and antimatter. If matter and antimatter were created in equal parts, as symmetry would dictate, then the two would annihilate each other, leaving nothing. Understanding how left-right symmetry is broken might give scientists new clues to how a matter-antimatter asymmetry was created in the early universe, the researchers say. Researchers still want to perform a number of checks to confirm that the asymmetry seen in the soup bubbles is real.

RHIC scientists plan, for example, to check that signatures of the symmetry-breaking bubbles do not appear at lower collision energies, where the matter wouldn’t be a quark-gluon plasma.

Experiments will continue at RHIC to further explore the quark-gluon plasma’s peculiar properties, so the latest report is far from the end of the soup story. “It’s not the final keystone,” Quigg says. “It’s a nice piece of continuing work. These are very early days. Like many good observations, this opens up many questions.”