That’s the implication of a new study that finds that each additional metric ton of CO₂ released into the atmosphere directly results in a 3-square-meter loss of sea ice cover at summer’s end — comparable to losing a chunk of ice with a footprint a bit smaller than a two-seat Smart car.

“For the first time now, it is possible to grasp how each one of us contributes to tangible consequences for the global climate system,” says study coauthor Dirk Notz, a climate scientist at the Max Planck Institute for Meteorology in Hamburg.

An individual’s impact on Arctic sea ice extent can now be estimated, thanks to new research. Each metric ton of carbon dioxide released into the atmosphere shrinks the average late-summer ice cover by about 3 square meters. Countries that emit a larger amount of CO2 per capita, such as the United States, have a larger impact on sea ice per person than lower-emission countries such as Uganda. 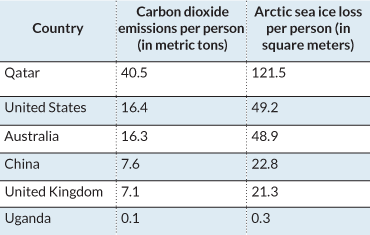 Globally, humans are responsible for the release of some 36 billion metric tons of CO₂ each year. With another trillion metric tons, the Arctic Ocean will have a completely iceless summer — possibly the first in 125,000 years. That threshold could be crossed before 2050, Notz and Julienne Stroeve of University College London estimate online November 3 in Science. Many previous studies projected that summertime ice would stick around for years longer (SN Online: 8/3/15).

“Sea ice feels so substantial when you’re standing on ice that can hold your own weight, that you can land an airplane on,” says Cecilia Bitz, an atmospheric scientist at the University of Washington in Seattle who was not involved in the study. The new work “makes it feel very fragile.”

Dwindling ice at the top of the world threatens Arctic species (SN Online: 5/14/08), can spread pollution (SN: 1/23/16, p. 9) and could open the region to transpolar shipping. In 2012, Arctic sea ice hit a record low since satellite observations began: just 3.39 million square kilometers, far below the average of 6.22 million square kilometers set from 1981 through 2010. How quickly the ice will continue to disappear remains unclear.

For their estimate, Notz and Stroeve analyzed records of Arctic sea surface temperature and minimum sea ice extent since 1953. The average extent of September sea ice declined in lockstep with the rising total amount of CO2 released from human sources, the researchers found.

This simple relationship between emissions and ice loss stems from one similarly straightforward mechanism, the researchers propose. As CO2 concentrates in the atmosphere, it strengthens the greenhouse effect, sending some heat back to Earth that would otherwise escape into space. This increases the amount of ice-warming infrared radiation hitting the Arctic, causing the outermost edge of the sea ice to retreat northward, where less sunlight hits the planet, and reducing total ice coverage.

Climate simulations underestimate this effect and don’t accurately re-create the sensitivity of Arctic sea ice to rising CO2 levels, the researchers argue. Other factors linked to sea ice loss, such as changes in ocean heat flowing from the Atlantic Ocean and in the region’s reflectiveness, were minor over the studied period compared with the increased radiative heating, Notz says.

Downplaying the role of ocean heating is a mistake, says Rong Zhang, an oceanographer at the National Oceanic and Atmospheric Administration’s Geophysical Fluid Dynamics Laboratory in Princeton, N.J. Sea ice coverage peaks in area during winter, when little light shines on the Arctic and the greenhouse effect is less important. But like the minimum, the maximum extent of Arctic sea ice has also declined over recent decades, reaching a record low in March (SN Online: 3/28/16). More observations are needed to determine whether warming from below or above the ice plays a larger role, Zhang says. “There’s not just one explanation,” she says.