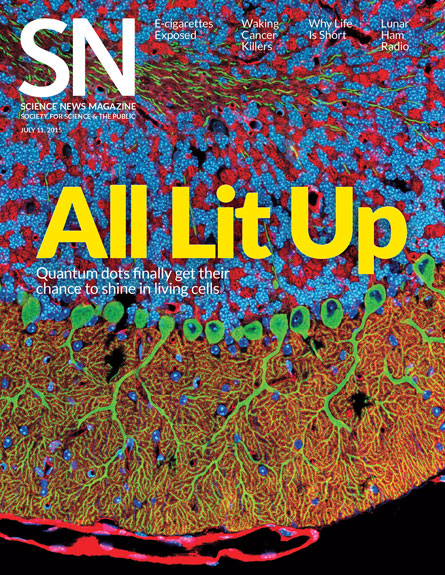 “How would the childbearing propensity of immortals change compared to mortals, and how would that affect the outcome of the simulation?” asked reader Mike Van Horn.

In general, immortals in the simulation evolved to have a much lower reproduction rate than mortals, says study coauthor Yaneer Bar-Yam of the New England Complex Systems Institute in Cambridge, Mass. By limiting the number of offspring, immortals prevented overpopulation and loss of resources. Mortals, on the other hand, reduced their number of offspring by limiting life spans. Mortals seemed to have the better strategy, since they won out over immortals in the long run.

In “Trackers decipher ancient footprints” (SN: 7/11/15, p. 8), Bruce Bower described how a trio of Namibian hunters used their experience to offer insights into the behavior of Stone Age humans.

“I loved this article, but it disappointed me as well, as it highlighted the arrogance that sometimes comes with science,” wrote Steve Schlosser in an e-mail. “On the one hand, we have individuals whose lives depend on their ability to interpret foot- (and hoof-) prints. Given their environment, their skill is surely the difference between hunger and satisfaction, safety and danger. Then we have the researchers, who discount the trackers’ skills by saying that people 20,000 years ago were anatomically different than people are today. Instead of embracing their skills and the insight they can contribute, experts in the field dismiss their knowledge. I’d like to drop these guys in the Namibian desert and see how well they could survive.”