Frustrated by the inability of footprint measurements to reveal ancient human activities in the caves, a team led by Andreas Pastoors of the Neanderthal Museum in Mettmann, Germany, called in a trio of Namibian Ju/’hoan San men who hunt together. Aside from tracking a range of animals, these men belong to a community where everyone learns to distinguish footprints of family and friends.

During visits to four French caves in 2013, the trackers offered new takes on behaviors reflected in ancient human foot impressions, Pastoors and colleagues report online May 6 in the Cambridge Archaeological Journal. Artifacts previously found in the caves belong to the Magdalenian culture, which dates to between 17,000 and 12,000 years ago.

Some of the most intriguing observations were made inside Tuc d’Audoubert cave. In an inner chamber, the trackers concluded that a man and a teenage boy had each hauled two loads of clay scooped out of a pit to an adjacent space. Foot impressions going away from the pit are deeper than those going back, consistent with two people having carried heavy loads to the nearby room, the trackers pointed out. A broken stalactite in the clay pit may have been used as a shovel.

Someone sculpted two expertly executed clay bison in the chamber next to the clay pit. No footprints are preserved on the rock floor surrounding the sculptures.

Pastoors’ group estimates that at least 90 kilograms of clay was removed from the pit. That total closely matches the amount of clay used to create the two bison. 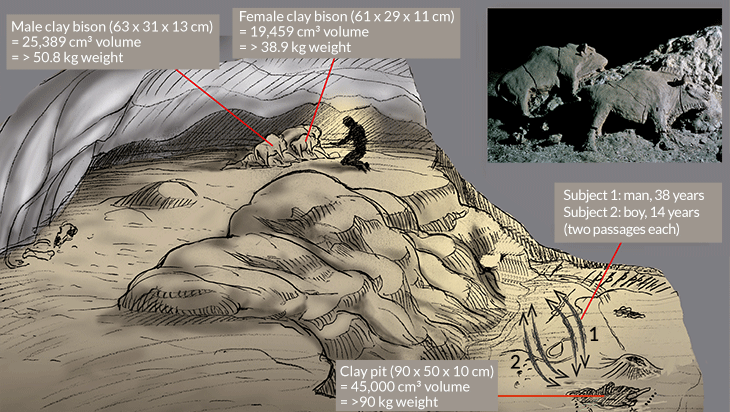 At France’s Tuc d’Audoubert cave, Namibian trackers interpreted footprints near a clay pit, depicted at right, as those of a man and a boy who each carried two loads of clay into a chamber where clay bison were sculpted (inset). The estimated amount of clay taken from the pit roughly equaled that used for the sculptures. The trackers proposed exact ages for the man and boy, which researchers treated as markers of adulthood and adolescence.

Oddly, footprints running to and from the clay pit indicate that whoever was there walked on their heels. Researchers have puzzled over those heel marks since they were discovered in 1912. One investigator suggested in 1928 that several young people had held a ritual dance in the cave.

The trackers disagreed. Heel walking guaranteed that no one would recognize the footprints of the man and boy, they proposed. An act of powerful symbolism, such as sculpting bison that likely had important ritual significance for their makers, may have demanded that those involved stay anonymous, Pastoors and his colleagues suspect.

“This is the first time we’ve gotten even a slight insight into how an ancient piece of art was produced,” says study coauthor Tilman Lenssen-Erz of the University of Cologne in Germany.

The trackers also identified seven previously unnoticed knee imprints near the pit. Those impressions lie close to lines drawn with fingers in the clay floor, apparently by the Stone Age man and boy while kneeling.

In the nearby Fontanet cave — which has attracted little research since the discovery of footprints there in 1972 — the trackers determined that a footprint previously suspected to have been made by someone wearing moccasins was actually made by a barefoot man. Partial marks remained from all five toes. Footprints of three more males were identified in the same area. Among nearly two dozen   footprints located nearby, the trackers identified impressions of six men, two women, one boy, three girls and a male of uncertain age.

At Pech Merle cave, the site of famous spotted horse paintings and a set of footprints discovered in 1922, the trackers noticed six more foot impressions. In their view, two men, two women and a boy made the prints while walking about 100 meters inside the cave.

Finally, the trackers read 38 previously discovered footprints at the Niaux cave system as those of a girl who strode across an area with a low ceiling. The girl may have stood just under 1 meter tall, Pastoors’ group estimates.

Of at least 24 individuals that the trackers identified from footprints in the four caves, 10 were children or teenagers. That number is too small to support previous speculation that Stone Age kids were the most frequent visitors to painted caves, Lenssen-Erz says.

Researchers who have studied ancient human footprints have mixed reactions to bringing in trackers from hunter-gatherer groups to interpret these finds.

Archaeologist Nick Ashton of the British Museum in London led a team that discovered footprints of at least five prehuman individuals from over 780,000 years ago (SN: 3/22/14, p. 14). Those impressions were briefly exposed along England’s coast before being washed away by the tides.

“In an ideal situation, it would have been informative to get the interpretation of modern trackers,” Ashton says. But hunter-gatherers today have no experience tracking hominids whose footprints reflected distinctive body builds, Ashton cautions.

Among their contributions, Pintubi trackers confirmed the presence of footprints made by a one-legged man who had hopped along using a stick for support — much as a one-legged hunter in their own community did.