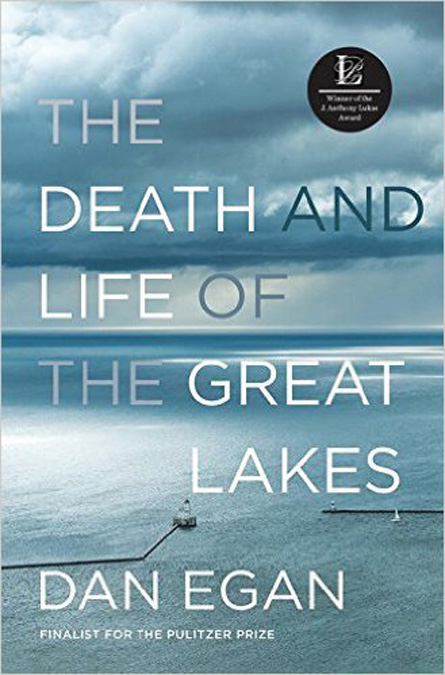 Every summer, people flock to the Great Lakes to swim and fish in the seemingly infinite waters and hike along the idyllic shores. But an ominous undercurrent flows just out of sight. Below the water’s surface rages an environmental catastrophe 200 years in the making.

In The Death and Life of the Great Lakes, journalist Dan Egan describes how the lakes’ natural history gave way to an unnatural one. From the effects of global trade and urbanization to climate change, the book offers an exhaustive (and sometimes exhausting) account of the abuses the lakes have endured.

Scars left by retreating glaciers and a failed continental rift, lakes Huron, Ontario, Michigan, Erie and Superior are more like inland seas, holding about 20 percent of Earth’s surface freshwater. The lakes were mostly isolated from international waters until a series of canals and seaways let in freighters from around the world. “These ships are like syringes,” as one biologist put it, injecting into the lakes living pollution.

Nearly 200 nonnative species now call the lakes home. The worst offenders — alewives, sea lampreys and zebra and quagga mussels — have ruined food webs. Egan dedicates a third of the book to these invaders and biologists’ best, and sometimes misguided, efforts to contain them.

But the lakes also face lesser-known problems. Egan deftly explains the science of these complex issues, including runoff-induced toxic algal blooms and extreme fluctuations in the lakes’ water levels attributed to climate change.

Despite all the bad news, there are glimmers of hope. After decades of living on the brink of collapse, native whitefish and trout are regaining a foothold — a boon for the ecosystem and local economies. Scientists are also experimenting in the lab with gene drives to stop invasive Asian carp and with new ways to rid ships of stowaways lurking in ballast water.

The lakes still face overwhelming challenges, but their biggest threat, Egan argues, is our own ignorance: “We are still treating the lakes … as liquid highways that promise a shortcut to unimaginable fortune.” With few easy solutions and numerous political roadblocks, future generations are “perhaps the best hope the lakes have to recover,” he writes. But if this book is any indication, there’s no time to wait.

Buy The Death and Life of the Great Lakes from Amazon.com. Sales generated through the links to Amazon.com contribute to Society for Science & the Public’s programs.