To rewrite an Alanis Morissette song, the brain has a funny way of waking you up (and putting you to sleep). Isn’t it ionic? Some scientists think so.

Changes in ion concentrations, not nerve cell activity, switch the brain from asleep to awake and back again, researchers report in the April 29 Science. Scientists knew that levels of potassium, calcium and magnesium ions bathing brain cells changed during sleep and wakefulness. But they thought neurons — electrically active cells responsible for most of the brain’s processing power — drove those changes.

Instead, the study suggests, neurons aren’t the only sandmen or roosters in the brain. “Neuromodulator” brain chemicals, which pace neuron activity, can bypass neurons altogether to directly wake the brain or lull it to sleep by changing ion concentrations.

Scientists hadn’t found this direct connection between ions and sleep and wake before because they were mostly focused on what neurons were doing, says neuroscientist Maiken Nedergaard, who led the study. She got interested in sleep after her lab at the University of Rochester in New York found a drainage system that washes the brain during sleep (SN: 11/16/13, p. 7).When measuring changes in the fluid between brain cells, Nedergaard and colleagues realized that ion changes followed predictable patterns: Potassium ion levels are high when mice (and presumably people) are awake, and drop during sleep. Calcium and magnesium ions follow the opposite pattern; they are higher during sleep and lower when mice are awake.

When scientists infuse a cocktail of eye-opening chemicals into the brains of sleeping mice (top), levels of potassium ions rise while calcium and magnesium ion concentrations fall. But a nightcap of sleep-inducing brain chemicals pumped into awake mice (bottom) causes potassium ion concentrations to plummet, while calcium and magnesium ion levels rise. 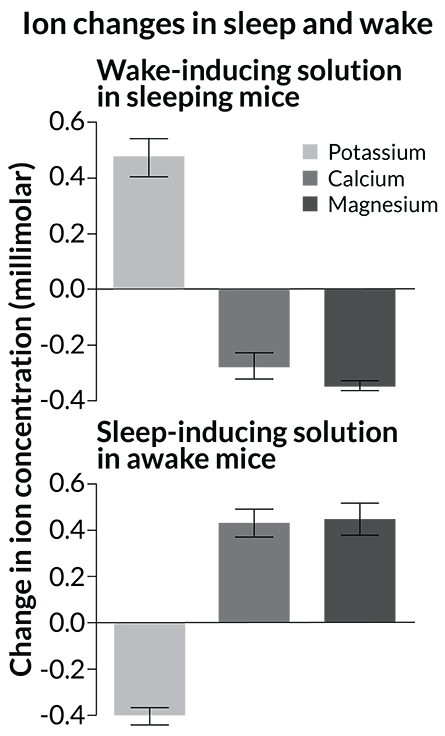 In the study, Nedergaard’s group administered a “wake cocktail” of neuromodulator chemicals to mouse brains. Levels of potassium ions floating between brain cells increased rapidly after the treatment, the researchers found. That ion change happened even when the researchers added tetrodotoxin to stop neuron activity. The results suggest that the brain chemicals — norepinephrine, acetylcholine, dopamine, orexin and histamine — directly affect ion levels with no help from neurons. Exactly how the chemicals manage ion levels still isn’t known.

Similar changes happen under anesthesia. When awake mice were anesthetized, potassium ion levels in their brains dropped sharply, while levels of calcium and magnesium rose, the researchers found. As mice awoke from anesthesia, potassium ion levels rose quickly. But calcium and magnesium levels took longer to drop. As a result, the mice “are totally confused,” says Nedergaard. “They bump into their cages, they run around and they don’t know what they are doing.”

Those results may help explain why people are groggy after waking up from anesthesia; their ion levels haven’t returned to “awake” levels yet, says Amita Sehgal, a sleep researcher at the University of Pennsylvania School of Medicine.

Learning more about how ions affect wake and sleep may eventually lead to a better understanding of sleep, consciousness and coma, Nedergaard says.

But, says neuroscientist Chiara Cirelli of the University of Wisconsin‒Madison, practical implications of the work, such as improved sleep drugs, are probably far in the future. “How they make use of it will take some time, but just knowing this is certainly very eye-opening.” It would be interesting to find out what happens to ion concentrations during REM sleep, when neurons are as active as they are when a person is awake, she says.

Editor’s note: This story was updated May 5, 2016, to correct how the anesthetized mice awoke.