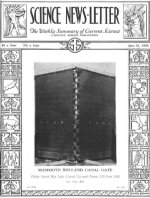 Slightly more than a century after the falls and rapids of Niagara were first overcome for water transportation by a canal only 8 feet deep, there has been completed on practically the same site a mammoth structure that will pass giant 600-foot lake grain vessels up and down the 326.5-foot difference in elevation between Lake Erie and Lake Ontario in just a few hours’ time. Although parts of the new Welland Canal have been in use for months, it is to be officially opened on July 1.

The lift of the Panama Canal is only 85 feet. The Welland Canal’s 326.5-foot lift is possibly the greatest of major canals and is especially noteworthy because a sharp rise in elevation makes necessary its accomplishment in a very short distance. The total length of the canal is 25 miles.

The locks have a usable length of 800 feet and width of 80 feet. They can easily carry vessels of 25-foot draft. Gates 82 feet high, as tall as some in the Panama Canal, are used. One leaf of a gate weighs 454 tons. They are built of structural steel faced with plates and contain hollow drums whose buoyancy helps to balance the heavy structures on their bearings.

Apparently speeding away from the Earth at the rate of 7,200 miles a second, a faint group of nebulae just studied by Mt. Wilson Observatory astronomers sets a new astronomical record. Speaking before the Pacific Section of the American Association for the Advancement of Science, meeting at Eugene, Ore., this week, Dr. Edwin P. Hubble and Milton L. Humason told of their studies, which make most previously measured astronomical speeds and distances fade into relative insignificance.

The nebulae studied form what is known as the Ursa Major cluster and are in the bowl of the Great Dipper, near the star under the point where the handle joins the bowl. Though too far away to be studied in detail, each member of the cluster is undoubtedly a swarm of stars, like the Milky Way system of which the sun is part.