NASA’s Kepler spacecraft has discovered a “cousin” of Earth 1,400 light-years away.

The exoplanet Kepler 452b orbits a sunlike star at about the same distance as Earth orbits the sun, scientists reported at a news conference July 23. The discovery is the first confirmed planet among 500 candidates newly identified by the Kepler mission.

But even though the new planet bears many similarities to Earth, experts say much about it remains a mystery.

Kepler 452b is about 60 percent larger than Earth, and about 5 percent farther from its sun. The planet’s size and distance place it in a zone that scientists say could support an atmosphere and liquid water, conditions needed for life as we know it. Unlike earlier planets found in this “habitable zone,” the new planet orbits a star that is close to the same size and brightness as our sun.

Smaller, cooler stars could also support life on nearby planets, says astronomer Lisa Kaltenegger of Cornell University. The new planet is a great discovery, but it’s just one of several exciting worlds that have been found, she says. “Kepler 452b tells us such interesting worlds exist out there and should exist also around our closest stars,” Kaltenegger says. 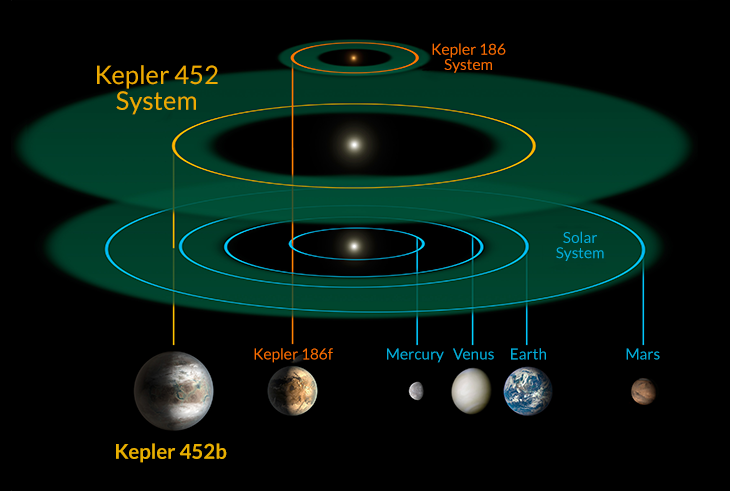 A year on Kepler 452b would be only 20 days longer than a year on Earth, as the planets orbit their stars at nearly the same distance. This position might provide the new planet with the right amount of energy to support liquid water. Many previously discovered planets that fall in a potential habitable zone, such as Kepler 186f, orbit cooler, smaller stars at much closer distances.

Even if Kepler 452b were identical to Earth in its size and orbit, it might not be able to support life, says astrophysicist Stephen Kane of San Francisco State University. While the planet’s size suggests that it could be rocky, like Earth, it’s also possible that the new planet is mostly gas. The planet is too far away to detect information about its atmosphere, Kane says.

The Kepler space observatory was designed to look for planets like Kepler 452b, which are close to the Earth’s size and in orbit around sunlike stars. Kepler measures small flickers in the brightness of distant stars to identify planets passing in front of them. Kepler has already discovered more than 1,000 other confirmed planets.

The new planet was found through advanced analysis of previously released data from the mission, which scanned the skies from 2009 to 2013. “Discoveries will be coming from Kepler for the next several decades,” said Kepler research scientist Jeffrey Coughlin of the SETI Institute in Mountain View, Calif.

Upcoming missions with different telescopes will aim to detect the atmospheres of planets that are closer to Earth, says Kaltenegger.