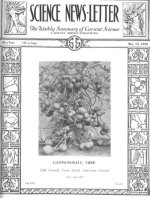 The strange growth represented on the cover of this issue of the SCIENCE NEWS-LETTER is not a freak grapefruit tree. It is the normal method of flowering and fruiting of the cannon-ball tree, a member of the monkey-pot family found in the forests of South America. Its fruiting branches always grow out of the lower part of the tree–a scheme that might well have been adopted by other trees that burden themselves with heavy fruits. The big round balls, looking very much like ammunition for old-fashioned smoothbore ordnance, are filled with inedible, fibrous pulp in which the seeds are embedded. The specimen shown in our picture is on exhibition at the Field Museum of Natural History, Chicago. It was collected by the Stanley Field Guiana Expedition.

A new picture of the universe, more modern than those painted by de Sitter and Einstein, was exhibited in the form of mathematical symbols in a report to the National Academy of Sciences by Dr. Richard C. Tolman of the California Institute of Technology, Pasadena.

Dr. Tolman bases his new explanation of the universe on today’s idea of the way matter and radiation are distributed in space and time. This leads to an explanation of the mysterious shift of light toward the red that is observed by astronomers in the light from distant nebulae. These great light patches of the sky are now thought to be other universes of stars at great distances from our own Milky Way galaxy in which the sun is a minor star. One such nebula is rushing away from the Earth at the rate of 7,200 miles per second if, as some scientists have previously thought, the red shift of the light is due to appalling differences of speed.

Although built on the theory of relativity, Dr. Tolman’s idea of the universe differs from that of Einstein in such a way as to conform to the contemporary opinion of astrophysicists that the universe is actually filled with matter changing into radiation. Einstein assumed a static universe permanently filled with a constant distribution of matter. De Sitter’s universe was permanently empty. Dr. Tolman’s universe is non-static and in it matter is dissipating on the average as astronomers find that it must dissipate in order to account for the luminosity of early type stars that are more vigorously radiating than our sun.

A new technical procedure by which the chemistry of the brain can be studied directly for the first time was described at the meeting of the American Psychiatric Association by Dr. Abraham Myerson of Boston.

Blood is taken from the artery which leads to the brain, the carotid artery, and from the vein which drains the brain, the internal jugular vein. In this way it is possible to measure directly the chemical changes which take place in the brain itself. The chemical content of the blood thus measured is compared with that of blood taken similarly from an artery and a vein in the arm.

It is thus shown that more sugar disappears in the brain than disappears in the arm. Since sugar is utilized in the body for something corresponding to muscular activity, it is evident that the brain utilizes sugar in somewhat the same manner as does the muscle.

It is also shown by these studies that the brain uses oxygen in at least the same amount as does the arm.

It has been believed that the brain is an active organ using up sugar and oxygen in much the same way that other organs do. It has been impossible to prove this, however, or to measure this activity until the introduction of this new research method.