By Andrew Grant and Thomas Sumner

Capturing the identity-shifting behavior of neutrinos has won Takaaki Kajita of the University of Tokyo and Arthur McDonald of Queen’s University in Kingston, Canada, the 2015 Nobel Prize in physics. The scientists spearheaded giant underground experiments that revealed that the elusive particles morph from one variety into another. Those crucial findings demonstrated that neutrinos have mass, which confirmed many physicists’ suspicions but defies the standard model, the framework that predicts the properties of nature’s particles and forces.

“It’s incredibly exciting,” says Janet Conrad, a neutrino physicist at MIT. “I had been waiting for this for so many years.” Neutrino mass, though minuscule for individual particles, could have major implications for improving the standard model and understanding the evolution of the cosmos.

The neutrino has carried a mysterious allure since physicist Wolfgang Pauli proposed its existence in 1930. Neutrinos have been around since the beginning of the universe, and they are constantly produced in the cores of stars and nuclear reactors. But they very rarely interact with other matter. In the 20th century, physicists had concluded that neutrinos are massless and appear in three “flavors,” named for the particle they produce upon interacting with matter: electrons, muons and taus.

But there was a problem with that picture. The sun serves as a massive nuclear reactor emitting torrents of electron neutrinos, but experiments detected roughly a third as many electron neutrinos radiating from the sun as expected. Some researchers began to suspect that the solar neutrinos were oscillating, or switching flavors, en route to Earth.

Neutrinos are so hard to detect, though, that it required ingenuity and a behemoth detector to study them. Enter Kajita and Super-Kamiokande. Switched on in 1996, the underground experiment in Japan consists of more than 11,000 sensors looking for flashes of light triggered by neutrino collisions inside a tank of 50,000 metric tons of water.

Kajita and his Super-Kamiokande collaborators focused on detecting muon neutrinos that are produced in the atmosphere when incoming charged particles from space collide with air molecules. The researchers counted up the rare flashes due to neutrino interactions and charted where each neutrino had come from. More muon neutrinos came from above than below, even though they pass unaffected through the Earth. In 1998, the team concluded that the neutrinos from below had enough time during their trek through Earth’s interior to change flavors, while the ones from above did not (SN: 6/13/98, p. 374).

While Super-Kamiokande produced compelling evidence for neutrino oscillation, the experiment couldn’t prove that the total number of neutrinos, regardless of flavor, was consistent. Within a few years, the Sudbury Neutrino Observatory in Canada took care of that issue by revisiting the missing solar neutrino problem. The smaller but still sizable tank was filled with heavy water, which is made up of hydrogen atoms with an extra neutron. Sometimes, an electron neutrino would strike an atom and produce a detectable electron. Other times, a neutrino of any flavor would hit an atom and trigger the release of a detectable neutron. By studying these interactions, the researchers developed independent censuses of total neutrinos and electron neutrinos.

In 2001 and 2002, McDonald’s team confirmed the scarcity of electron neutrinos from the sun but showed that the shortage disappeared if one took into account neutrinos of all flavors (SN: 6/23/01, p. 388). “There certainly was a eureka moment in this experiment when we were able to see that neutrinos appeared to change from one type to the other while traveling from the sun to Earth,” McDonald said in a news conference. 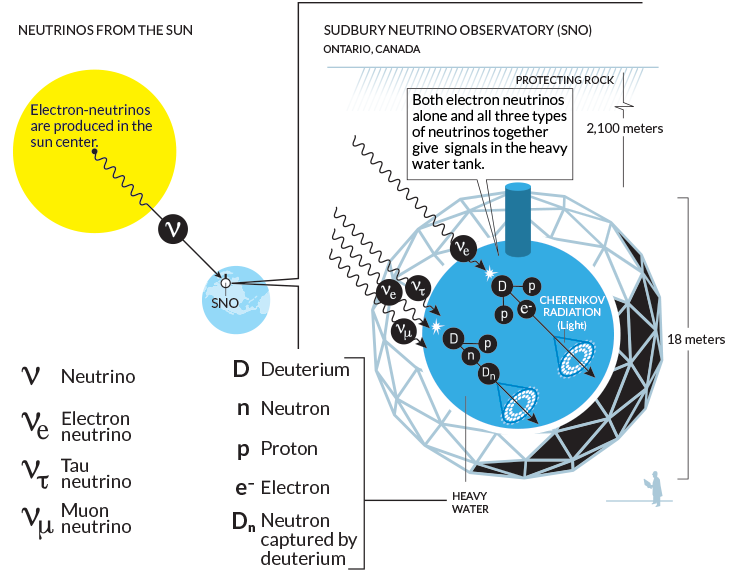 The Sudbury findings simultaneously solved the missing solar neutrino problem and confirmed Super-Kamiokande’s conclusion that neutrinos change flavors and have mass. While neutrinos can be thought of as particles, they are also waves made up of three components (the three flavors) that are constantly interfering with each other. As the neutrino moves through space, the identity of its composite wave shifts.

The discoveries sparked what Conrad calls the neutrino oscillation industry. Experiments analyzing neutrinos produced in the sun, the atmosphere, particle accelerators and nuclear reactors are delivering precise measurements of neutrinos’ identity-changing behavior (SN: 1/26/13, p. 18). These results should enable physicists to determine the exact masses of the three neutrino flavors, which each must be extremely small — about a millionth the mass of an electron.

Many physicists hope neutrinos further defy expectations. A few recent experiments suggest that the oscillating behavior of neutrinos may differ from that of their antimatter partners. Such a discrepancy could help explain why the universe is dominated by matter, even though the universe probably started out with equal parts matter and antimatter.