Drugs that have saved the lives of millions of people around the world have earned their discoverers the 2015 Nobel Prize in physiology or medicine. One half of the award goes to William Campbell of Drew University in Madison, N.J., and Satoshi Ōmura of Kitasato University in Tokyo for their work on a drug called ivermectin, which combats roundworm infections. The other half goes to Youyou Tu of the China Academy of Chinese Medical Sciences in Beijing for her discovery of the antimalarial drug artemisinin.

“This is one of those Nobel Prizes for drugs that have truly impacted hundreds of millions of people, no exaggeration,” says Anthony Fauci, director of the National Institute of Allergy and Infectious Diseases in Bethesda, Md. “They’re incomparable in terms of numbers.”

Together, ivermectin and artemisinin “have been more benefit to humankind than any other” drug, says Christopher Plowe, a parasitologist at the University of Maryland and president of the American Society for Tropical Medicine and Hygiene. “Penicillin would be a big contender, but these would definitely be in the top two.”

Ōmura discovered a bacterium called Streptomyces avermitilis in the vicinity of a golf course in Japan. The bacteria make a compound called avermectin. “Microorganisms are very important in nature, and … I learn from microorganisms,” Ōmura said in a telephone interview with a representative of the Nobel committee.

Campbell, a parasite biologist who was working for the pharmaceutical company Merck, tested the compound and found that it was very effective in killing larvae of some parasites. Later, the compound was tweaked to make ivermectin, a compound that is even more powerful against parasites that infect humans and animals.

Ivermectin has been the single biggest factor in eliminating river blindness from Latin America, says Ben Makepeace, a parasitologist at the University of Liverpool in England. That disease is caused by a roundworm parasite called Onchocerca volvulus that’s transmitted by the bite of black flies. Embryonic larvae, called microfilariae, move through the eyes and under the skin causing blindness, severe itching and inflammation. With the introduction of ivermectin, Colombia and Ecuador have now eradicated the disease. About 100 million doses of the drug were administered in 2013 in 24 countries.

Ivermectin also works against roundworms that cause elephantiasis, a debilitating disease that infects about 120 million people. The disease is transmitted when one of three different types of roundworm are passed to people through the bite of an infected mosquito. Larvae clog the lymphatic system, causing swelling in the limbs. The disease may also affect the genitals. Ivermectin used in conjunction with another drug can stop transmission of the infectious form of the parasite.

The other half of the Nobel Prize recognizes a remedy for malaria, which in 2013 afflicted nearly 200 million people. In combination with other drugs, artemisinin is the top choice to fight Plasmodium falciparum, the protozoan that causes the worst kind of malaria infections. Artemisinin “is a critical drug in our fight against malaria,” Fauci says. 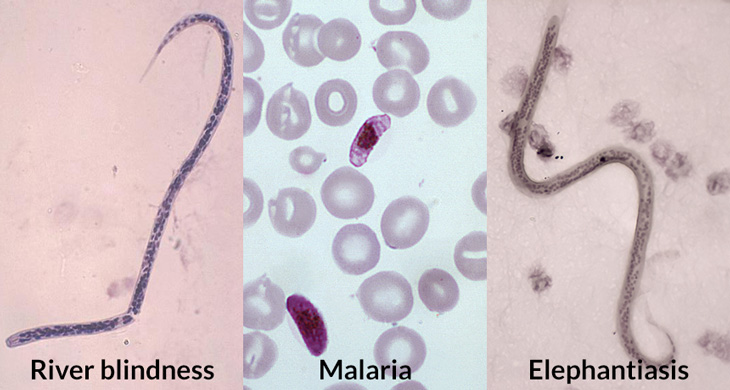 River blindness is caused when black flies transmit Onchocerca volvulus. Elephantiasis, or lymphatic filariasis, results when infected mosquitoes pass one of three parasitic worms to people. Wuchereria bancrofti is responsible for 90 percent of cases. Malaria is also transmitted by mosquitoes. Plasmodium falciparum is the most common of the disease-causing parasites, but other Plasmodium species may also sicken people.

The modern drug has ancient roots. In 1967, China began Project 523, a national effort to combat malaria. As part of the project, Tu and her colleagues combed through over 2,000 traditional Chinese herbal recipes. A compound found in the sweet wormwood plant (Artemisia annua) showed promise. After seeing that the extract was able to fight Plasmodium infections in mice and monkeys, Tu tested the preparation on herself to make sure it was safe.

From there, Tu and colleagues figured out ways to purify and prepare the drug. “She took this from herbal treatment to medicine,” says immunologist and infectious disease researcher Dyann Wirth of Harvard T.H. Chan School of Public Health. “She’s clearly a brilliant woman, but to have the tenacity to accomplish this is truly amazing. I have enormous respect for her.”

Artemisinin is one of the most widely used drugs in the world, Wirth says. Often used in tandem with other drugs, artemisinin quickly rids the bloodstream of most Plasmodium parasites, leaving its partner drug to clear up the remaining protozoans.

In the years since the discovery of artemisinin the malaria landscape has changed. In Cambodia and other parts of Southeast Asia, certain strains of Plasmodium are starting to show signs of resistance to artemisinin (SN: 9/6/14, p. 9). “Even under the best of circumstances, parasites have a way of evolving into a resistant form,” Fauci says. “Still, today, artemisinin is the drug for falciparum malaria. This is the best.”

Campbell feels strongly that there are still many more useful drugs just waiting to be discovered in plants, soil and other natural sources. “There is a certain amount of hubris in humans thinking that they can create molecules as well as nature can create molecules in terms of the diversity of molecules, because nature consistently produces molecules that have not been thought of by humans,” he said in an interview with a representative from the Nobel committee.