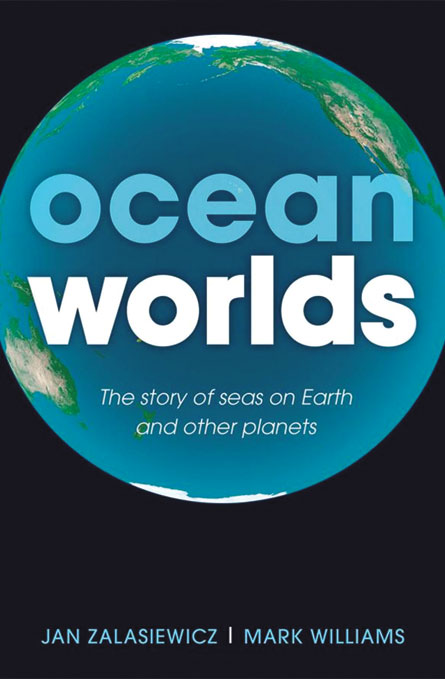 Ocean Worlds: The Story of Seas on Earth and Other Planets
Jan Zalasiewicz and Mark Williams
Oxford Univ., $29.95

The oceans of other worlds might look nothing like Earth’s tranquil blue seas. Under the right high-pressure conditions, the water could exist in a weird supercritical state that is neither liquid nor steam. And yet the key to understanding such alien landscapes may lie close to home, around submarine volcanoes right here on Earth.

Ocean Worlds looks at the inner workings of Earth’s oceans — and of other worlds’ seas as well. Drawing on the latest research, Jan Zalasiewicz and Mark Williams trace the history of our planet’s water. The authors begin the story not long after the Big Bang, with water vapor swirling around a black hole. From there, the authors follow the comets and asteroids that may have delivered water to Earth, trace water’s motion through deep ocean currents and recount water’s role in the origin of life.

Other worlds in the solar system offer a glimpse of the many ways seas can form and evolve. Zalasiewicz and Williams look to the moons of Jupiter and Saturn, where liquid oceans of saltwater hide beneath thick crusts of ice. Our two neighboring planets, Venus and Mars, once harbored water as well. Venus, in particular, provides a peek at what’s in store for Earth over the next billion years as our planet loses its oceans to a slowly brightening sun.

Zalasiewicz, a geologist, and Williams, a paleontologist, aren’t afraid to step well beyond their fields to dabble in astrophysics, planetary science, oceanography and microbiology. If the book sounds ambitious, it is. But their clear, descriptive writing is a joy to read. Anecdotes sprinkled throughout keep Ocean Worlds from reading like a textbook; the authors describe how slave-trading ships discovered the cold waters of the deep ocean and what the movie Waterworld got wrong about climate.

Between the birth of the solar system and the eventual desertification of the Earth, the authors pause to consider humankind’s role in shaping the oceans. And not surprisingly, it’s not good. Overfishing, rising temperatures and growing acidity threaten to destroy ecosystems. These are all trends that could be reversed with prompt action, but political reality seems to make this an unlikely outcome. “It would be ironic,” the authors write, “to discover a wealth of strange and bizarre oceans out in the cosmos just as we are dismantling the beautiful and unique oceans on our own doorstep.”

Buy Ocean Worlds from Amazon.com. Sales generated through the links to Amazon.com contribute to Society for Science & the Public’s programs.