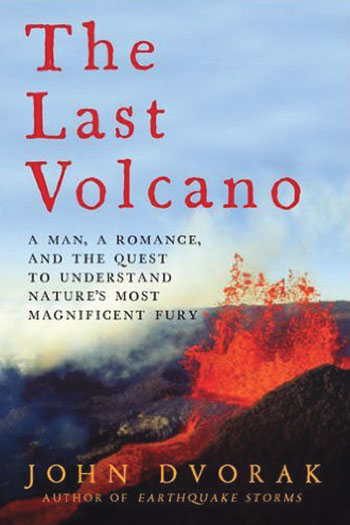 Since prehistoric times, erupting volcanoes have been both awesome and mysterious. But these days, they’re a good bit less mysterious thanks to Thomas Jaggar. In The Last Volcano, geologist John Dvorak captivatingly chronicles the life and times of this vanguard scientist.

Jaggar’s research in the late 19th and early 20th centuries forms the foundation of almost every aspect of modern volcanology, Dvorak says. Jaggar foresaw the need for a network of volcano and earthquake observatories. And as the director of such a facility in Hawaii, he was among the first scientists to collect samples of gas spewing from Mauna Loa — samples that are still some of the best ever collected during an eruption there.

Headlines and summaries of the latest Science News articles, delivered to your email inbox every Friday.

In a career spanning more than 50 years, Jaggar visited and studied volcanoes in Europe, Central America, Japan and the Pacific. During much of that time, his home base was a cliff overlooking the lava lake inside Hawaii’s Kilauea volcano, taking data at the observatory he founded there in 1912 (and where a museum for the public bears his name today).

The Last Volcano is packed with details about Jaggar’s personal as well as professional life, many of which are taken from his voluminous writings. Born in Philadelphia and the youngest son of an Episcopal bishop, Jaggar witnessed an eruption of Vesuvius as a teenager — and even hiked down into the peak’s smoldering crater — when his family traveled through Europe in 1886. But the biggest influence on the budding geologist came in 1902, when he served on a team of U.S. scientists investigating an eruption of Mount Pelée on the Caribbean island of Martinique. Interviewing survivors of that event, which killed tens of thousands of people, inspired him to study the then-inexplicable behaviors of volcanoes.

Dvorak also shows how Jaggar’s pioneering efforts extended beyond volcanology: He was the first scientist to issue a tsunami warning, and he built an amphibious vehicle whose design formed the basis for the DUKW (or “duck”) boats used as landing craft by the U.S. military during World War II.

Buy The Last Volcano from Amazon.com. Sales generated through the links to Amazon.com contribute to Society for Science & the Public’s programs.