To catch the faint signal of a spacecraft leaving the solar system, you have to listen very carefully. At NASA’s Jet Propulsion Laboratory in Pasadena, Calif., that’s Suzanne Dodd’s job.

Dodd (below) is project manager for NASA’s twin Voyager probes, launched in 1977 to explore Jupiter and Saturn. Voyager 2 did that and more, as the first probe to fly by Uranus, in 1986, and Neptune, in 1989. It’s now 15 billion kilometers from Earth and headed out of the solar system.

Its twin is farther ahead. After visiting Saturn, Voyager 1 headed directly toward interstellar space, beyond the bubble of charged particles that surrounds the solar system. Voyager 1 is now more than 18 billion kilometers from Earth; Dodd has to wait 17 hours each way for a message to travel between Earth and the probe. Last summer the craft crossed through a strange transition, where the flood of charged particles from the sun dropped to nearly nothing but the sun’s magnetic influence did not wane (SN: 1/12/13, p. 17). Project scientists think this means that Voyager 1 is getting very close to the boundary with interstellar space.

Dodd, who was inspired to become an engineer after watching the Apollo astronauts walk on the moon, says nothing compares to running the Voyager probes. “We’re not flying it just to fly it — we’re flying it because we’re still getting new data,” she says, such as information about conditions at the edge of the solar system. “It’s the only craft to do that in our lifetime.”

The Voyager mission’s many discoveries include volcanoes on Jupiter’s moon Io, density waves in Saturn’s rings and giant grooves on Uranus’ moon Miranda. NASA hopes Voyager 1 will also send the first direct measurements of the environment outside the solar system. Each year, though, a bit more of the radioactive plutonium that powers the probes decays away, and around 2020 NASA will have to start switching off the five remaining scientific instruments, one by one. By 2025 or soon thereafter, the Voyagers are likely to have run out of juice and become passive sailors among the stars. Dodd expects to be listening until the end. 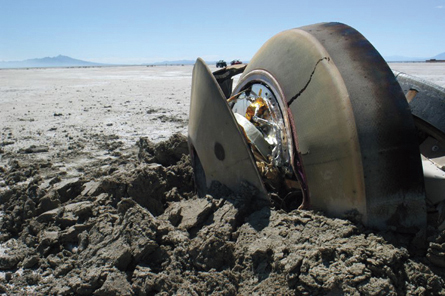 The Voyager probes will end their careers drifting through interstellar space. Other spacecraft have met a variety of fates.

Genesis: This mission to sample solar wind, launched in 2001, crashed in Utah (above) when it returned to Earth in 2004. Scientists managed to extract some samples from the crumpled spacecraft to learn about the chemistry of charged particles flowing from the sun.

Venera 9: This Soviet mission to Venus, launched in 1975, carried the first probe to send photographs back from the surface of another planet. It transmitted from Venus for 53 minutes before going silent.

Spirit and Opportunity: The rovers landed on opposite sides of Mars in 2004 with a nominal lifetime of three months. Spirit traveled 7.7 kilo­meters before getting stuck in a sand dune in 2009. Opportunity is still exploring.

Ebb and Flow: Their goal to map lunar gravity complete, the twin probes hurtled — by design — into the side of a mountain on the moon in December 2012.