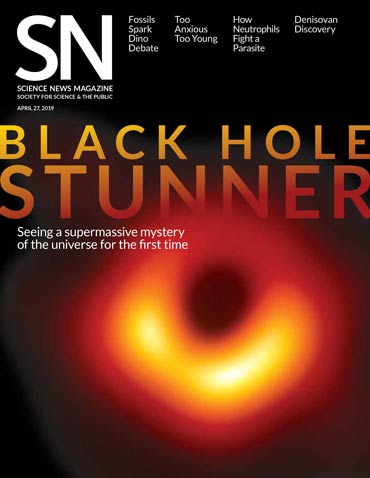 The Event Horizon Telescope captured the first image of a black hole (shown on the cover of Science News at left). Data from the telescope array revealed that the behemoth, which resides at the center of the galaxy M87, is about 38 billion kilometers across and about 6.5 billion solar masses, Lisa Grossman and Emily Conover reported in “The first picture of a black hole opens a new era of astrophysics” (SN: 4/27/19, p. 6).

Those measurements astounded reader Eric Johnston. After doing his own calculations, he wondered how a black hole that is larger and more massive than the sun could also have a fraction of the sun’s density.

Eyes on the sky

In 2017, telescopes around the world worked together like one giant radio dish to capture the image of M87’s supermassive black hole, Maria Temming reported in “How scientists took the first picture of a black hole” (SN: 4/27/19, p. 7).

Reader Yancy Meyer wondered how the observatory at the South Pole was used in the telescope network if it cannot actually see M87. “I would think all of the telescopes would need to see the target object,” Meyer wrote.

“The South Pole observatory didn’t contribute directly to observations of M87 because that galaxy does not rise above the horizon at the South Pole,” Temming says. But the observatory did help monitor another supermassive black hole powering the quasar 3C 279. That helped scientists confirm the telescope network’s performance when it viewed M87’s black hole. The observatory also spotted Sagittarius A*, the black hole at the center of the Milky Way, which scientists still hope to image with the data collected from the 2017 observing run and future runs.

Researchers estimate that a chytrid fungus has caused population declines in at least 500 amphibian species with 90 presumed extinctions, Kathleen O’Neil reported in “Chytrid’s frog-killing toll has been tallied — and it’s bad​​​​​​​” (SN: 4/27/19, p. 5). The pathogen can kill its host within a few weeks.

“Killing your host is not a good strategy,” online reader Jan Steinman wrote. If the fungus can kill so quickly, “why has it not died out as well?” Steinman asked. “Does it have some other reservoir species that can tolerate it without dying?”

Yes, some amphibians that become infected with Batrachochytrium dendrobatidis, or Bd, don’t die. Those animals “are key in maintaining chytrid fungus and preventing it from burning out,” says ecologist Benjamin Scheele of the Australian National University in Canberra. Lab tests show that these lurking infections can remain a risk for a long time.

Steinman also wondered if the pandemic could be stemmed by treating the reservoir species.

The fungus can infect so many kinds of amphibians that Scheele doesn’t have much hope for finding one remedy for all creatures at risk. He predicts that researchers will need to explore a wide spectrum of options from high-tech genetic manipulations to simple protection from reservoir hosts through environmental refuges. And for conservationists, watching out for Bd lurking in reservoir species will be vital.

In “Surprising astronomers, Bennu spits plumes of dust into space” (SN: 4/13/19, p. 10), the credit for images taken by the OSIRIS-REx spacecraft of the asteroid Bennu is incorrect. The images should have been credited to D.S. Lauretta et al/Nature Astronomy 2019.