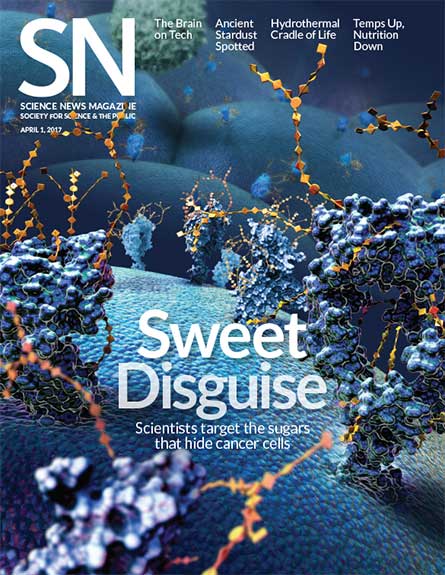 “Are the offending sugars referred to in this article the ones we are eating or are they the result of metabolizing other carbs that we eat?” Gene Yagla asked.

Cancer cells don’t build their disguises from the sugars and carbohydrates that we eat, says Ajit Varki, a glycobiologist at the University of California, San Diego. In general, cells make all of the components they need for their sugary coatings themselves.

However, Varki notes that one dietary sugar may be linked to cancer. N-glycolylneuraminic acid, a sugar found in red meat, causes an immune response when cells absorb it, he and colleagues reported in Molecular Aspects of Medicine in 2016. “This phenomenon is one likely explanation for the human-specific negative impact of excessive red meat intake and its association with cancer, atherosclerosis and other inflammatory processes,” Varki says.

A slew of recent studies hint that near-constant interactions with digital technology may change how people’s brains remember, navigate and create happiness, Laura Sanders reported in “Digital minds” (SN: 4/1/17, p. 18). In one small study of 104 college students, more than half unlocked their phones an average of 60 times a day and spent upward of 3&frac12; hours on the devices.

Camera traps captured a badger burying an entire cow by itself, a group of researchers reported in the journal Western North American Naturalist. It is the first time scientists have documented American badgers squirreling away animals so much larger than themselves, Sarah Zielinski wrote in “Camera trap catches a badger burying a cow” for the Wild Things blog. “Maybe he likes ground beef,” reader Bruce Baker commented on Facebook. Watch the video at bit.ly/SN_badger

“If people are looking at their smart devices 60 times a day, there must be some feedback mechanism causing this behavior. Is there any research exploring the internal reward process to determine what part of the brain is affected?” Leonard Bohlman asked. Maybe smartphones stimulate pleasure centers in people’s brains the same way food, sex and social interactions do, he wondered.

Explanations for the allure of smartphones abound. “I heard about an interesting idea from neurologist Adam Gazzaley of the University of California, San Francisco, who describes humans as ‘information foragers,’” Sanders says. “He argues that the same neural circuits that drove our ancient ancestors to find food have morphed into human brains that push us to relentlessly seek information. That powerful need might help explain why so many of us feel compelled to peek at our digital devices,” she says.

But when results from the functional MRI scans of dogs’ brains were reported in Science, left and right hemispheres were accidentally reversed in all images, the researchers wrote in a correction published April 7 in the journal.