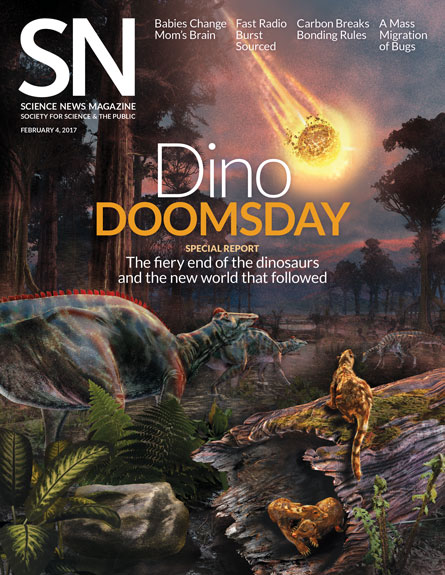 Dinosaurs and other creatures were largely wiped out 66 million years ago from an asteroid impact, volcanic eruptions or maybe a mix of the two, Thomas Sumner reported in “Devastation detectives” (SN: 2/4/17, p. 16), in the Science News special report “Dino Doomsday.”

Online reader Mike van Horn wondered if the timing of the v­olcanic eruptions, which happened for h­undreds of thousands of years before and after the asteroid impact, could have allowed marine organisms to adapt to increasingly acidic oceans.

Scientists don’t know if bouts of volcanic eruptions helped marine critters survive the harsh post-impact environment. But studies of ocean acidification’s effects on marine organisms living today hint that adaptation may not have been viable, Sumner says. In a recent experiment, armor-plated phytoplankton regained their shell-making abilities after researchers dunked them in acidified water. But those gains disappeared after further exposure (SN: 8/6/16, p. 8).

Starfish larvae use hairlike cilia to stir up whorls of water, called eddies, and suck in prey, Emily Conover reported in “Baby starfish on the hunt whip up whirlpools” (SN: 2/4/17, p. 14).

Reader George von Dassow disputes the reported finding. “Unfortunately, [the researchers’] work is based on a well-documented and well-understood artifact, which biologists who study the behavior of microorganisms often work hard to avoid,” wrote von Dassow, a developmental biologist at the University of Oregon. “In short, trapping active swimmers between a microscope slide and a coverslip gives rise to eddies.” Von Dassow and colleagues have submitted a comment to Nature Physics, where the original study appeared.

Hagfish are famous for sliming sharks and other predators. But sometimes sharks land a bite before getting slimed. New research shows that hagfish skin provides an extra layer of protection, Susan Milius reported in “Unusually loose skin protects hagfish” (SN: 2/4/17, p. 13). The loose skin easily slips and slides, possibly preventing shark teeth from getting a grip. Watch a hagfish slime a shark.

The authors of the original paper, including biophysicist Manu Prakash of Stanford University, stand behind their result. Prakash wrote that von Dassow and colleagues “misunderstood how vorticity is injected in this system.” Prakash and colleagues have submitted a response to Nature Physics.

“The idea that gases are removed when water is heated is one possible explanation for the Mpemba effect,” Conover says, “but there hasn’t been a scientific study able to show definitively that just removing gases from water caused it to freeze faster — at least not one that is accepted by scientists who have studied the effect.” In fact, scientists don’t agree on whether the Mpemba effect occurs at all, much less what causes it. “Freezing is a very delicate process, which makes precise experiments challenging,” she says.

In “Built for speed” (SN: 3/4/17, p. 20), Laurel Hamers reported that researchers engineered Escherichia coli bacteria to make virus-inspired capsules that can be used as catalysts. The research appeared in Nature Chemistry, not Nature. Science News regrets the error.