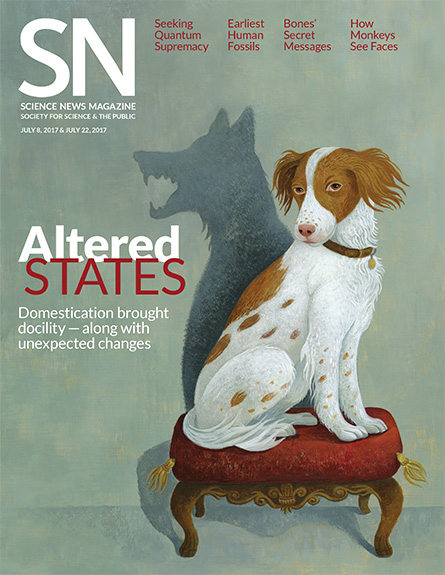 “How do wrasses ‘suck’ if they have no lungs?” asked reader John Coventry.

Suction-feeding fish let their mouths do all the work, says marine biologist David Bellwood. “In just the same way that we suck a milk shake, it is decreasing pressure of our tongue and throat that moves the fluid. Fish do not have tongues, but they do have very powerful muscles,” he says. Suction feeders create low pressure zones inside of their mouths, which causes water outside to rush in. Tubelip wrasses have the additional aid of mucus, which creates a seal between their mouths and reefs’ razorlike ridges. Bellwood and colleagues think that this mucus sealant may help wrasses slurp up coral mucus, but the mechanics of the process are hazy.

A topical drug stimulated melanin production in samples of live human skin shielded from the sun, Aimee Cunningham reported in “Sunless tanner could protect skin” (SN: 7/8/17 & 7/22/17, p. 11). It’s an early step in developing a lotion or cream that might protect people against skin cancer.

Ken Lapre asked if the tanner could be used to treat or cure vitiligo, which causes discoloration of the skin.

Get ready! On August 21, a total solar eclipse will cut across the United States from coast to coast for the first time in nearly a century. If you plan to observe the celestial event (with protective eyewear, of course), tweet your eclipse photos and reactions to @ScienceNews using the hashtag #eclipse2017.

It is unknown at this point whether the sunless tanning approach would help people with vitiligo, Cunningham says. In this condition, melanocytes — the skin cells that make pigment — are destroyed. But there can be stages of vitiligo in which some melanocytes remain, says cancer biologist David Fisher. “If that were the case, then
perhaps stimulating those cells to make more pigment might be beneficial.”

“I thought I remembered reading other research indicating that a single neuron could recognize a familiar face,” Dan Roberts wrote. He wondered how both findings could be true.

Researchers think that the two systems might work together, Hamers says. “The set of neurons described in the new research is a flexible way to represent any face a monkey might encounter.” Single face-specific neurons (SN: 6/25/05, p. 406) reside in a different part of the brain and “are more like a speed dial tuned to a smaller number of familiar faces,” Hamers says.

Online reader Christopher Studley wondered if the energy boost from the black hole would accelerate the light waves beyond light speed.

The black hole’s rotational energy isn’t accelerating the light waves, Conover says. It increases the amplitude of the waves, or how bright the light is. “This is analogous to the height of the water ripples in the experiment,” she says.