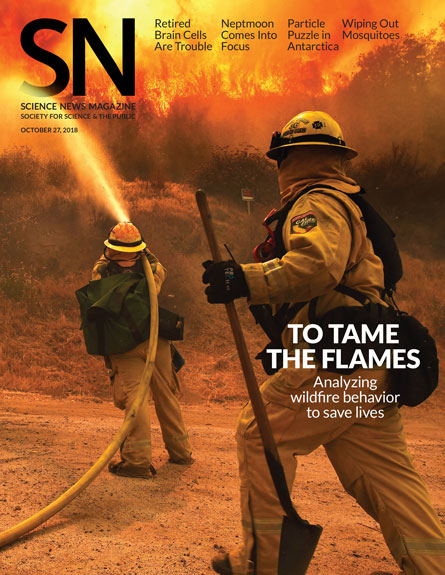 A sighting by the Hubble Space Telescope provides more evidence that there’s a Neptune-sized moon, dubbed Neptmoon, orbiting the exoplanet Kepler 1625b, Lisa Grossman reported in “Hubble may have spotted the first known exomoon” (SN: 10/27/18, p. 14).

“If Neptmoon actually exists, could it possibly have moons of its own?” online reader MAdScientist72 asked. “And what would we call a moon of a moon?”

It’s certainly possible that Neptmoon could host a moon of its own, Grossman says. “It would probably be called a moonmoon, submoon or, my favorite, an exomoonmoon,” she says. Those are hypothetical names — scientists have not yet spotted such a satellite. For Neptmoon to have an exomoonmoon, the object would have to be close enough to be captured by Neptmoon’s gravity, but not so close that it would get torn apart, Grossman says.

At least four moons in our solar system are large enough to play host, astronomers Juna Kollmeier of Carnegie Observatories in Pasadena, Calif., and Sean Raymond of the University of Bordeaux in France reported online October 8 at arXiv.org. Saturn’s moons Titan and Iapetus, Jupiter’s moon Callisto and Earth’s moon could theoretically host moonmoons.

Readers on Twitter thought the fish belonged to a more colorful era. “It obviously evolved during the 1980s,” @BeTheShovel wrote. “Unreal! I was thinking more like the ’60s #psychedelic,” replied @stormkittykat.

Gravitational waves produced by spinning neutron stars could provide scientists with evidence of nuclear pasta’s existence. But such spacetime ripples will occur only if a neutron star’s crust has mounds, or “mountains,” of dense material that are tens of centimeters tall.

Reader Doug Quine asked about Conover’s word choice. “I would hardly describe the length of my arm as the height of a mountain,” Quine wrote. “I suspect the units should have been … kilometers.”

The mountains are just centimeters tall, Conover says. “The reason scientists use the term ‘mountains’ despite the formations’ diminutive size is because the gravity of a neutron star is so strong that something a centimeter tall is actually quite an extreme bump,” she says.

According to a new calculation, the search for extraterrestrial intelligence, also known as SETI, has combed the equivalent of a hot tub’s worth of Earth’s oceans, Lisa Grossman reported in “We may not have found aliens yet because we’ve barely begun looking” (SN: 10/27/18, p. 5).

Readers online were fascinated by the search for life elsewhere in the universe.

“We can’t really explore the ocean one hot tub at a time,” Mark S. wrote. “Perhaps a better approach would be to scan for emissions around each of the most promising exoplanets that have been discovered,” he suggested. “Keeping with the ocean analogy, this is more like looking for fish around islands or atolls.”

Scientists’ inability to find intelligent life beyond Earth, despite the identification of planets beyond our solar system, emphasized for Robert Stenton just how unique Earth is. “We are probably one of the very few planets to not only have a civilization, but also unique intelligent life such as whales and elephants, or beautiful creatures such as pandas, Bengal tigers or giant sequoias,” Stenton wrote.

He continued: “Perhaps if nothing else, we should have learned from SETI to treasure what we have and protect all of it, just as we now protect special habitats by declaring them national parks. Perhaps we should declare the whole Earth a ‘Universe Treasure.’ From what we now know, even something as lowly as a cockroach may exist nowhere else in the universe.”