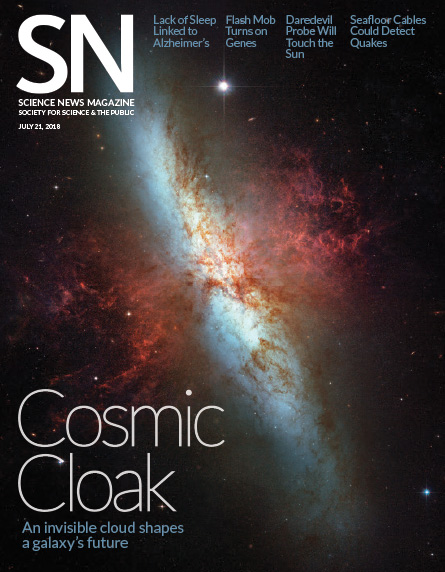 NASA’s Parker Solar Probe is on its way to “touch” the sun. Maria Temming reported on the mission before the August 12 launch in “NASA’s Parker probe is about to get up close and personal with the sun” (SN: 7/21/18, p. 12).

Reddit user Gildolen wondered how the probe could touch the sun, if the star doesn’t have a solid surface.

Gildolen is correct that the sun doesn’t really have a surface, Grossman says. “It’s all gas and plasma in different densities and configurations.” The spacecraft will fly through the solar corona, the wispy atmosphere that can be seen during a total solar eclipse. The corona is “definitely connected to and influenced by the sun, but it’s not the part we normally think of as the sun’s ‘surface,’ ” she says. “There are named regions — the photosphere is the part we can see, the chromosphere is just above that, the corona is farther out still — but the boundaries between them aren’t well defined.”

Stories about a roughly Delaware-sized Antarctic iceberg and a cache of liquid water on Mars fascinated online readers this summer. Tantalizing biology and medical tales also made for good reads. These were the five most-read Science News stories published online in July:

Reddit user iklassic asked why the probe wouldn’t burn up in the corona.

The corona won’t burn the probe because the corona is so diffuse, Grossman says. “It’s like how you can put your hand in the oven for a short time and be fine, but if you touched a stove at the same temperature, it would burn you. The same idea applies to the spacecraft,” she says.

“What sort of recording (video, audio, photographs) will the probe be doing?” asked Reddit user MikeCanter.

“The probe will mostly be recording things like how many charged particles of a particular type pass by the detectors in a given amount of time — not very pretty,” Grossman says. “The scientists will be able to translate some of the data into audio, and it may sound like a hiss.” Scientists will be able to compare the things that Parker sees close to the sun with images from telescopes that take pictures of the sun while orbiting Earth, she says.

Einstein’s general theory of relativity passed yet another test, this time over a distance of about 6,500 light-years, Emily Conover reported in “Einstein’s general relativity reigns supreme, even on a galactic scale” (SN: 7/21/18, p. 15). The result challenges certain proposed tweaks to the theory.

Reader John Jaros wanted to know more about what it means to “tweak” general relativity.

There are various reasons why scientists think general relativity is not the final theory of gravity. For one, general relativity is incompatible with quantum mechanics, Conover says. “It’s clear how gravity works between two planets or two tennis balls, but go very small and it doesn’t work. Physicists don’t know how to calculate the gravitational interaction between two quantum particles,” she says. That’s because, according to quantum mechanics, particles can be in two places at one time. “So scientists are trying to ‘quantize’ gravity, which means, essentially, to make it behave in a quantum way. String theory, in which each particle is represented by a vibrating string, is one attempt at a theory of quantum gravity,” Conover says.

Down to the wires

Seafloor cables that ferry internet traffic across oceans could be used to detect earthquakes, Maria Temming reported in “Underwater fiber-optic cables could moonlight as earthquake sensors” (SN: 7/21/18, p. 8). The cables can also pick up underwater sounds from other sources.

Online reader mmcln wondered if researchers could now detect signals that the cables may have intercepted long ago, such as ones from Malaysian Airlines Flight 370, which disappeared over the Andaman Sea in 2014.

Detecting past signals is not possible, Temming says. “You have to intentionally send laser light into the cable, and look at it when it comes out the other side,” she says. “People weren’t using this technique when the Malaysian plane went down, so no one would have ‘heard’ anything through the cables.”