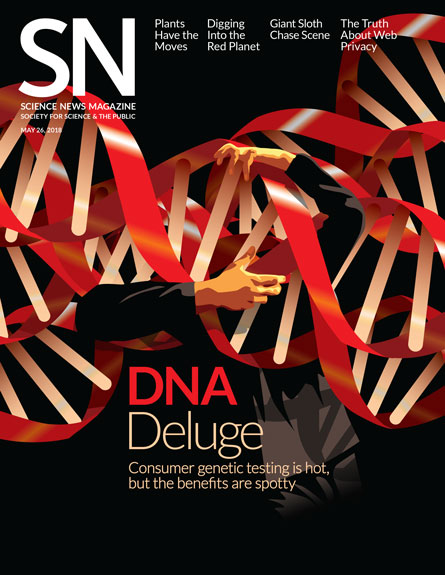 Reader Elizabeth McDowell asked if there may be a link between geothermal power generation at a plant in Hawaii and the ongoing Kilauea eruption.

“Did the geothermal plant inject so much water down those wells that it not only caused earthquakes but a huge eruption?” she asked. “Maybe the lava is pointing an accusatory finger at the cause by encroaching on the geothermal plant itself.… I think Hawaii should be the researchers’ next case study!”

Think before you spit

Consumers are jumping on the genetic testing bandwagon. While the test results can be fun and informative, many people don’t know what else might be in store.

But Hawaii’s geothermal power plant doesn’t require any high-pressure injections; its location next to a volcano is no accident. The subsurface there is already fractured and very hot, well-suited for geothermal power generation, Gramling says. In other words, injections didn’t cause Kilauea to erupt.

Researchers created a new kind of plastic polymer that could, in theory, be infinitely recyclable, Laurel Hamers reported in “This plastic can be recycled over and over and over again” (SN: 5/26/18, p. 12).

Online reader Mark S. wondered how the plastic could be commercialized.

“Without an easy way to separate recyclable plastic from the mass of nonrecyclable plastic, it doesn’t seem like there would be much [of a] market,” he wrote. He suggested embossing the new plastic with a bar code that would allow an artificial intelligence sorting system to separate it.

Throwing the new recyclable plastic in with your regular recycling pickup would probably be a waste of the plastic’s unique properties, Hamers agrees. “This isn’t necessarily a barrier to commercialization. Existing biodegradable and compostable plastics face a similar challenge. Such plastics break down only under the right microbial conditions, but can end up in a landfill without those environments,” she says. A challenge will be to figure out how to divert these special recyclables into their own production streams, perhaps by using bar codes, as Mark S. proposes, or through a direct-to-manufacturer return process, she says.

“Inquiring minds want to know why the world’s last dusky sparrow suffered the indignity of dying at Disney World, amid thousands of parents who were wishing they were dead,” online reader Jan Steinman wrote.

The bird lived in captivity on Discovery Island, a now-defunct zoological park. Discovery Island housed a sparrow breeding program as part of Disney’s wildlife conservation efforts. “No word from the birds on how they felt about it,” Brookshire says.