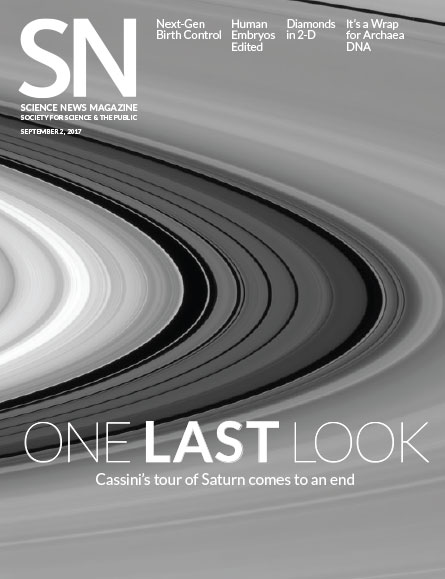 Engineers recently launched prototypes of miniature spacecraft. The prototypes, each a single circuit board, include solar panels, radios, thermometers and gyroscopes, Maria Temming reported in “These chip-sized spacecraft are the smallest space probes yet” (SN: 9/2/17, p. 5).

“Does the gyroscope actually stabilize the chip, or just provide information that can be signaled back to ground stations?” reader Mark S. asked online. He also wondered how a Sprite keeps its solar cells aimed at the sun. “Doesn’t it need a small battery for those moments it’s briefly shadowed by the Earth?”

The gyroscope is just a sensor and does not stabilize the spacecraft, says Sprite designer and Harvard engineer Zac Manchester. The current Sprite model can’t steer itself and works only when basking in sunlight — there’s no backup battery on board. “We don’t worry about keeping them continuously powered on,” he says. But self-steering is something Manchester and colleagues hope to develop for future versions.

The genomes of five Canaanites whose remains were unearthed in Sidon, Lebanon, shed light on the ancient civilization’s forebearers and descendants, Maria Temming reported in “Ancient DNA offers clues to the Canaanites’ fate” (SN: 9/2/17, p. 8).

“The five Canaanites are all from a single location (Sidon), so their genealogy may not be representative of the entire Canaanite territory,” online reader Tony Cooley wrote. “If they were buried closely together, they may have been relatives…. The source does not discuss how the five individuals were obtained.”

The individuals were not relatives, says Claude Doumet-Serhal, director of the British Museum excavations in Sidon and study coauthor. The five ancient people analyzed in this study were discovered in different types of graves — including pits, constructed graves and in various jars — that were dated to different time periods during the Canaanite age in Sidon, between about 1900 B.C. and 1550 B.C.