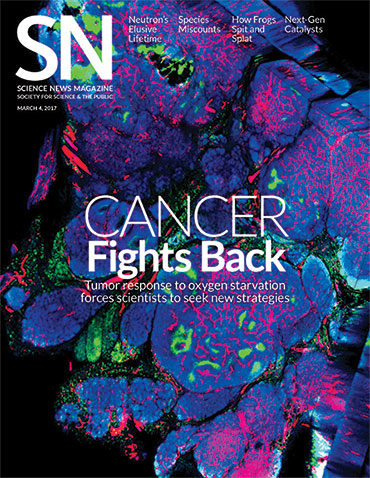 People who stay mentally healthy throughout life are exceptions to the rule, a small study suggests. Only 17 percent of study participants experienced no bouts of anxiety, depression or other mental ailments from late childhood to middle age, Bruce Bower reported in “Lasting mental health may be unusual” (SN: 3/4/17, p. 7).

Reader Lou Floyd found the article disturbing and the research hard to believe. “I have to question any set of characteristics that results in declaring that 80 to 85 percent of a given population is abnormal. A more likely explanation might be that the definitions of the various possible mental maladies are overly broad and lacking in precision,” Floyd wrote.

That definitions of psychiatric d­isorders are imprecise will come as no surprise to Science News readers (SN: 12/28/13, p. 29). “Legitimate or not, psychiatric diagnoses have helped multiple long-term studies identify widespread episodes of emotional problems in Western populations,” Bower says. “Perhaps these findings will help to destigmatize the experience of emotional difficulties, whether given a diagnostic label or not.”

If released at the right time, a pair of sound waves known as acoustic-gravity waves could weaken a destructive tsunami and knock its height down by almost 30 percent, Emily Conover reported in “How to sap a tsunami’s strength” (SN: 3/4/17, p. 5).

Michael Oman-Reagan and other readers on Twitter wondered if these large sound waves might have sonarlike effects on ocean critters.

Acoustic-gravity waves occur naturally in the ocean and some studies suggest they may be crucial for marine life, says applied mathematician Usama Kadri. Naturally occurring acoustic-gravity waves generate currents that transport nutrients as well as plankton and other microorganisms that are sources of food for larger marine animals, Kadri reported in the Journal of Geophysical Research: Oceans in 2014.

Frogs can grab large and oddly shaped prey with their tongues, thanks to a combination of soft, squishy tissue and saliva that quickly changes its viscosity, Susan Milius reported in “What gives frogs the gift of grab” (SN: 3/4/17, p. 11). Watch a high-speed video of frogs nabbing bugs.

But it is unclear what impact waves produced by artificial sources may have on marine life. “Since we’re interested in the low-frequency end, [the waves] cannot be compared to sonar noise that’s in the audible range of marine animals,” he says. “Nevertheless, a comprehensive study of the environmental effect is vital.”

Two experiments — trapping neutrons in a bottle and shooting them in a beam — disagree over the particle’s life span, Emily Conover reported in “Neutron longevity remains elusive” (SN: 3/4/17, p. 13).

Reader Kimberly Barden wondered if the discrepancy scientists have found in measurements between the experiments could be due to relativistic effects: “Since motion slows time, it would make sense if neutrons in motion decay more slowly.”

Fast-moving particles will live longer due to special relativity, but the neutrons in beam experiments travel at speeds too slow to account for the discrepancy seen in measurements of the neutron lifetime, Conover says. Neutrons in those experiments travel at about 2,000 meters per second, or about 0.0007 percent of the speed of light. “Those speeds would add only a fraction of a billionth of a second to the lifetime,” she says. “To account for the nine-second-longer lifetime seen in neutron beam experiments, the neutrons would have to be traveling at more than 10 percent of the speed of light.”