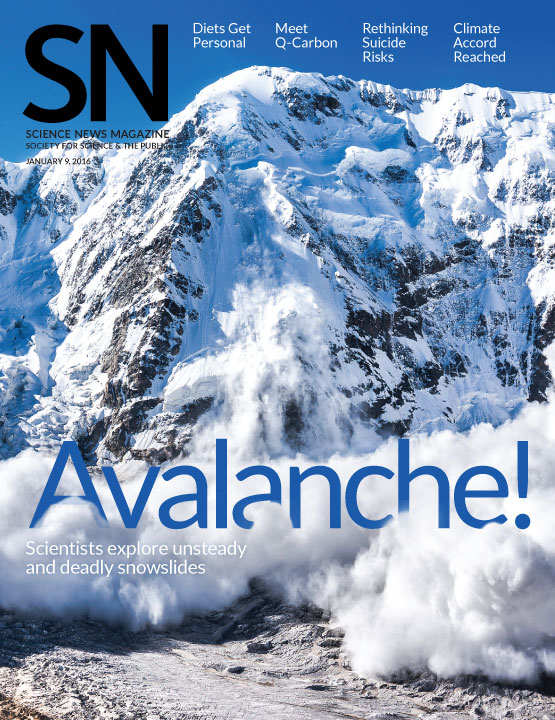 Tarantulas evolved a blue hue at least eight times, but scientists aren’t yet sure what purpose the coloration serves, Susan Milius wrote in “Tarantula blue is no accident” (SN: 1/9/16, p. 4). In the article, spider researcher  Bor-Kai Hsiung wonders if, for example, the blue might scare away predators or attract insects.

More than one reader wanted to know whether tarantulas are diurnal, a clue that might help researchers narrow in on the significance of the coloration. In a paper reporting their findings, Hsiung and his colleagues wrote that tarantulas are “largely nocturnal ambush predators that reside in burrows,” further deepening the puzzle of how color could be helpful, says Milius.

Ann Ony Mus compared the puzzle of tarantula blue to the more famous conundrum of whether scorpions get any benefit from glowing under ultraviolet light. That trait, though widespread among scorpions, is often dismissed as having no function of its own, but instead being a side effect of some other trait. There is, as she said, “No apparent advantage to it that we can discern at this time.”

Hsiung and colleagues argue against dismissing tarantula blue as a useless side effect. A satisfying dismissal, they say, would have to explain how the different structures in hairs in different tarantula species, which appear to have independent origins, converged on rather similar shades of blue.

Physicists at Harvard have measured quantum entanglement among several atoms, not just two. As part of the experiment, the researchers cooled the atoms to nearly absolute zero. “As the atoms jumped around, they interacted and established a state of entanglement,” wrote Andrew Grant in “Multiparticle entanglement quantified” (SN: 1/9/16, p. 9).

Jack LaValleywondered how atoms cooled so close to absolute zero could jump. “An observation of atoms jumping around at that temperature threatens my basic understanding of the behavior of matter in the absence of heat,” LaValley wrote.

Atoms have their ways, says Grant. Even when cooled to fractions of a kelvin, atoms still have some energy of motion. They can also employ the trick of quantum tunneling. The optical cage in the experiment presented a barrier, requiring atoms to spend a certain amount of energy to hop over into a neighboring compartment. But occasionally the atoms crossed through the barrier, essentially burrowing through, without paying the full energetic price. This doesn’t happen in everyday life (wouldn’t it be great if we could pass through walls rather than climbing over them?), but quantum physics permits it.

Scientists are studying the science behind avalanches in an effort to better understand their immense power and perhaps predict them, Alexandra Witze wrote in the cover story “White out” (SN: 1/9/16, p. 16).

Readers agreed that this is important work. John Turner wrote that it would also be “fascinating to compare avalanches on Earth’s ice and snow fields to avalanches on icy moons and dwarf planets.” But perhaps the most poetic commentary came from Twitter user @topherutech, who shared this bit of “modern haiku”:

In Alan Boyle’s recent story on nuclear fusion approaches by private-sector start-ups (SN: 2/6/16, p. 18), some points about Tri Alpha Energy’s approach were incorrect. Rather than a type of magnetic hybrid fusion, Tri Alpha considers its approach a form of magnetic confinement fusion. The company expects to reach temperatures that are a few times higher, not 10 times higher, than previous efforts. It expects to take the first steps toward commercialization in a decade, rather than having a complete product on the market.