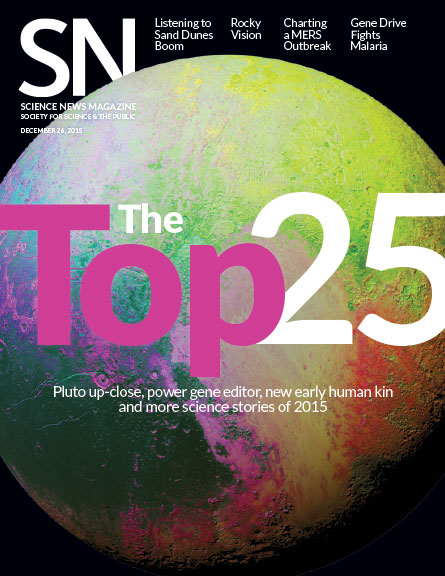 The New Horizons mission to Pluto beat out the breakthrough gene editor CRISPR for the top spot in our list of the 25 most important stories of 2015 (SN: 12/26/15, p. 16). “CRISPR is a method. It’s a story still being written,” wrote Eva Emerson, editor in chief. “Seeing a faraway planet for the first time is whiz-bang; it’s a new frontier.”

As we expected, print and online readers were mixed on whether Pluto or CRISPR deserved to be No. 1. Pluto “has already impacted our imaginations powerfully and visually,” wrote reader Robert Walty, who commended us on the placement. CRISPR, he added, still has the potential “in some of its uses” to be No. 1 in 2016 or 2017. Another reader, Joe M. Wesley, adamantly disagreed, writing that the choice was unfounded. “Who in management has a degree in astronomy?” he asked.

If we gave an award for top Twitter replies of the year, this one from @MasterMarquette would most certainly be in the running. When @NewHorizons2015 tweeted that the team was proud to be named the year’s top science story by @ScienceNews, he made a quick quip about Pluto’s 248-year orbit:

@ScienceNews@NewHorizons2015 Are you referring to an Earth year or a Pluto year, in which case, that is *really* big news.

Elizabeth Nolan had a more balanced view. “Original, as I sense original, is seeing something for the first time, something that is really there. Uncovering a great unknown that really does exist. Creativity, on the other hand, to me, is putting something together in a new way,” she wrote. “In this regard, Pluto seems original; CRISPR, creative. Let’s hope they both add positive contributions to our lives.”

Best of the rest

Regarding the Mars find, Twitter follower @gabgar95 wrote: “Wow! The universe is so fascinating, it keeps surprising us every day! Hard to believe some ppl find fake myths more majestic.”

“Love dinosaur news,” wrote Sandy Whitney on Facebook,in response to our video of the top fossil finds online. “Years in millions … unbelievable!” said Usman Khan. “This is why I love science,” added Robert Ganson. “It’s not blind faith, it’s discovery of facts and it’s not afraid to change when change is moving forward with knowledge.”

Sue Mandeville wanted to know why this was such a good year for discovering “the oldest” fossils. We don’t have a good answer for that. The seemingly large number might simply be an artifact of where journalists focused their reporting. But we did check in with vertebrate paleontologist Samuel A. McLeod, a collections manager at the Natural History Museum of Los Angeles County. He suspects that the number of new species discovered in the fossil record each year is in the hundreds. “It’s not like you go out in the field and you pick one up and say, Eureka, I’ve got a new species,” he said. “You have to collect them, prepare them, sit down and do all the research. It takes a long time.” And discovery doesn’t happen at a constant rate, either. “It’s like everything; there are dry spells.”

Readers also pointed to some stories they thought we’d missed, including the successful landing of the SpaceX rocket (SN Online: 12/22/15). Unfortunately, the rocket wasn’t even considered because it didn’t stick its landing until after our press date.

In “Engineered vocal cords show promise,” (SN: 12/26/15, p. 9) Chris Samoray wrote about bioengineered tissue that hums in tune with human vocal cords. The approach “opens a route to developing new therapies for people who have lost their voice due to surgery or disease.”

Reader Mike Cord wondered: Hasn’t a currently available prosthesis known as the Blom-Singer valve brought relief to many laryngectomy patients? “It seems to be an overstatement that good treatment is not available,” he wrote.

Nathan Welham, who led the study, responded: “Our article describes a treatment to replace impaired or missing vocal fold mucosa, which is the vibrating portion of the larynx that is important for making sound for voice. It is not necessarily a treatment for laryngectomy patients who have had the entire larynx removed.”