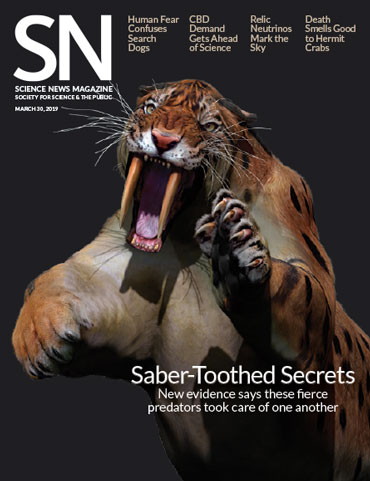 Researchers found iron oxides trapped in a sample of green Antarctic ice. The compounds may explain why typically blue-hued icebergs can sometimes appear green, Jeremy Rehm reported in “Tiny bits of iron may explain why some icebergs are green” (SN: 3/30/19, p. 12).

“Since icebergs can drift for thousands of miles, and because iron is a limiting nutrient for algae, I wonder if these bergs are a significant source of iron for algae in temperate latitudes?” reader Karl Chwe asked on Facebook. Chwe also asked if decreasing numbers of Antarctic icebergs, and therefore reduced iron transport, could impact the amount of algae available to soak up and store carbon dioxide, accelerating climate change.

While it’s true that icebergs, especially giant ones, supply some iron to the ocean and support algae, most Antarctic icebergs never make it to temperate regions, Rehm says.

There’s stiff competition for shells among land-dwelling hermit crabs (one shown below). New research hints that the scent of a dead hermit crab may signal to neighbors that a shell is up for grabs, Yao-Hua Law reported in “Hermit crabs are drawn to the smell of their own dead” (SN: 3/30/19, p. 10). Video of the hermit crabs in a frenzy over deathly smells, which Science News posted on Instagram, inspired reader drplockwood to dub the behavior “musical shells.”

And Antarctica’s icebergs may actually be increasing in number, he says. But green icebergs are uncommon. “They account for maybe 3 percent of Antarctic icebergs, based on a survey researchers did from a helicopter,” Rehm says. “So even if green icebergs do carry iron, it’s uncertain they would play a large role in iron delivery, especially outside the Antarctic region.”

Some astronomers are pushing for NASA to make looking for technosignatures, or signs of alien technology, an official goal, Lisa Grossman reported in “It’s time to start taking the search for E.T. seriously, astronomers say” (SN: 3/30/19, p. 4).

Online reader Jan Steinman doubted that human civilization would last long enough to detect technosignatures. The best signs of intelligent life future humans would be able to detect “may be smoke signals” from no farther than the next mountain range on Earth, Steinman wrote.

That’s an interesting point, and one that astronomers have considered, Grossman says. Carl Sagan, a pioneer of the field dedicated to searching for extraterrestrial intelligence, called SETI, made a similar observation in the 1980s when he and four other scientists warned about the possibility of nuclear winter (SN: 11/12/83, p. 314).

SETI pioneer Frank Drake and colleagues published a study in 2018 that found that even if we find technosignatures, it’s likely that the alien civilizations that made them will have already died out (SN: 4/14/18, p. 9). “Smoke signals indeed,” Grossman says.