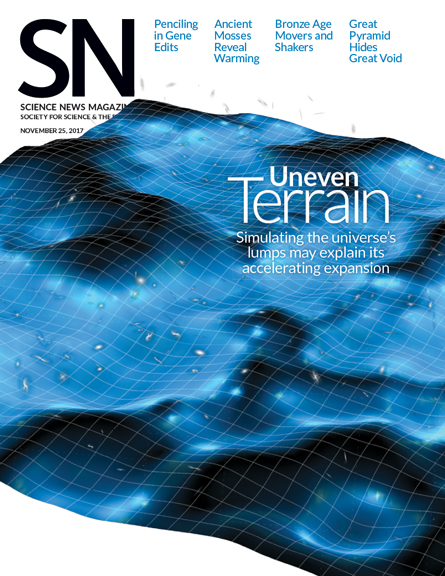 Pedal to the universal metal

The universe’s accelerating expansion “is apparently based on the observation of objects that are moving away from Earth at speeds that increase as the distance to the object from Earth increases,” reader Tom Phillips wrote. “But the greater the distance from Earth, the farther back in time the object is being observed. This implies that the universe was expanding faster in the past than at present. What am I missing?”

Phillips isn’t alone in his confusion, Conover says. “We know that the universe is expanding thanks to the redshift of light from faraway sources. That light looks redder to us (meaning it has longer wavelengths) than it was when originally emitted,” she says. “In the case of the expanding universe, the redshift isn’t caused by the source moving away from us, but by space itself expanding.”

That expansion stretches out light as it travels, giving the light a longer wavelength over time. The farther away a light source is, the longer the light must travel to reach Earth, which means that its light will be more redshifted. The reason cosmologists know that the universe’s expansion is accelerating is that sources that are the farthest away are less redshifted than expected, given how long the light has been traveling. “That means at the time long ago when the oldest light was emitted, the universe was expanding more slowly,” Conover says.

A few readers on Reddit wondered how scientists could further explore the cavity. “Where to from here?” asked Reddit user Etrigone. “I’m assuming we can’t get to the void…. Any other techniques to allow for a better idea of what it looks like?”

If the muon detectors were left running in their current locations for many years, researchers could get more precise images and possibly detect smaller structures, says Mehdi Tayoubi, cofounder of the Heritage Innovation Preservation Institute in Paris, which led the project. Moving the detectors to other locations around the pyramid could give the team a different view of the void.

Unfortunately, the void is located in a place that is difficult to access from the inside, Tayoubi says. A roboticist recently joined the research team, which now hopes to design a robot that would fly inside the pyramid as well as other monuments. Whether Egyptian authorities would allow such a robot to explore the pyramid from the inside is not yet known, the researchers say.

Online reader Abhishek wondered if waste flushed into space could make its way to other celestial bodies like the moon or Mars. If future missions “find residues which date to sometime in the 20th or 21st century, wonder how [the] world will react,” Abhishek wrote.

There’s already human waste on the moon in bags left there by astronauts. But any waste that’s ejected from spacecraft in orbit around Earth is too close to the planet to escape the pull of Earth’s gravity. “Small objects decay very quickly and enter the atmosphere,” says planetary scientist Ralph Lorenz of Johns Hopkins University. It takes a lot of energy, Grossman adds, for something to leave Earth’s orbit. For instance, “rocks from Earth have reached Mars, but only after a major asteroid impact launched them.”