Julius von Bismarck wants to feel like he’s the center of the universe. He likes the idea of living on a spinning platform for days, maybe weeks — long enough, he hopes, to trick his mind into believing that he’s standing still while the world revolves around him.

The project isn’t an exercise in egotism. It’s his way of coming to grips with how people used to view their place in the cosmos.

“I’ve always been fascinated by the idea that humans once thought the Earth was the center of the galaxy,” says von Bismarck.

This playful approach to science earned the 28-year-old German artist a place at CERN, Europe’s largest physics laboratory and home of the world’s biggest atom smasher. In March he began a two-month stay as the institution’s first artist in residence, kicking off a program bringing digital arts, dance and performance to the lab. His task, as he sees it, is to build bridges between the bizarre world that particle physicists think about and the familiar world that people experience every day.

One idea that he has come up with is to create a row of lightbulbs dangling from long cords. Tug on the cords, and the lights swing in circles. Each light could play the role of a particle, with the size of the circle and the speed of the lightbulb’s motion providing an intuitive sense of the particle’s properties.

“As an artist, I can be more free in my approach than a scientist,” says von Bismarck, whose grandfather and brother both became physicists. “I can make something that can be experienced and get you closer to the way scientists think.”

In a previous piece, von Bismarck toyed with how to visualize a four-dimensional universe. He built a doughnutlike device made of a coiled wire that continuously twists itself inside-out, its contortions representing the motion of time. The contraption, called a self-revolving torus, looked like a Slinky coated with aluminum foil and moved like a Roomba vacuum cleaner.

Von Bismarck’s work at CERN — whatever it ultimately becomes — will be displayed at the Ars Electronica festival in Linz, Austria, in the fall.

As a child, Julius von Bismarck broke into abandoned military bases to find components for explosives. So it’s no surprise that as an adult his art uses technology to explore the world in unconventional ways. For more photos and videos of his projects, go to www.juliusvonbismarck.com. 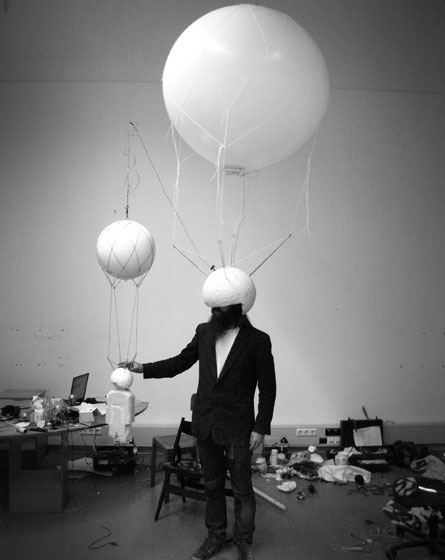