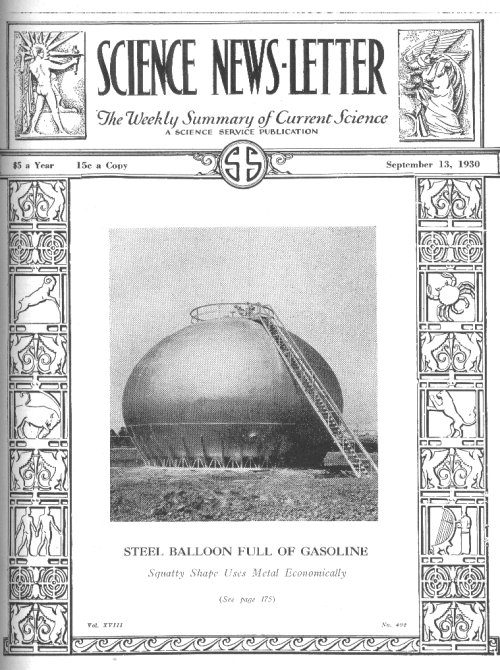 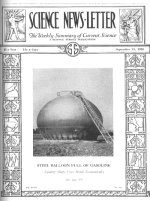 If you fill a rubber balloon with water, put the inside under about 15 pounds pressure, and set it down on a table, it will assume a shape very much like that of the huge metal tank shown on the front cover. In fact, that is the very reason this tank was built as a bulging spheroid.

For the same amount of steel, a tank made in this odd shape will hold more liquid than one of the usual cylindrical design. As much material as possible is used for a direct purpose and as little as possible merely to maintain shape. The bottom, shell, and roof form a more-or-less continuous curve, and much of the bursting force is transferred from the sides to the roof and bottom so that practically all the metal is used for effective stress purposes.

Natural gasoline, high-test, and even some ordinary motor-fuel gasolines boil at ordinary temperatures, and the loss from this boiling is excessive unless the liquid can be subject to a slight pressure.

The spheroid is built to withstand effectively the combination of gas and liquid pressures. As the gas pressure is increased, the structure tends to become more spherical, and as it is filled with liquid, it tends to flatten out. The only place where the tendency to change shape is sufficient to require reinforcing is near the bottom, and here supports take care of the overhanging liquid load.

Large quantities of Aztec literature, believed to have been lost forever when the Spanish conquerors entered Mexico and destroyed the pagan writings of the Indians, are still in existence. This idea of Prof. John Hubert Cornyn, authority on Aztec language and literature at the National University of Mexico, is based on his studies of Bernardino Sahagun, a 16th-century Franciscan monk who compiled a most ambitious history of the Mexican people.

A highly penetrating radiation of electrons from the sun, guided along the magnetic lines of force of the earth, then entering into the surface of Earth and producing electric currents within, may be the cause of earthquakes, volcanoes, and Earthly weather conditions. This sensational hypothesis was presented at the recent meeting of the American Astronomical Society in Chicago by Dr. Benjamin Boss, director of the Dudley Observatory, Albany, N.Y.

Einstein’s gravitational universe, assumed in his theory of relativity, is therefore really an electromagnetic one, if the views of the Albany astronomer are correct.