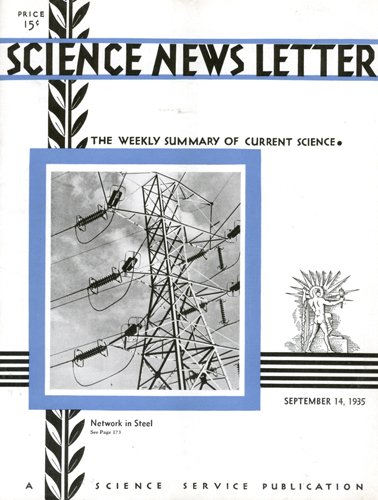 Symmetry and design typify the Science News Letter cover this week, in the illustration of a modern tower for electric transmission lines. The auxiliary copper leads carrying the current around the giant insulators can be seen hanging in large arcs at the left, near the center. The insulators must not only be of sufficient size to prevent a jump-over of the line voltage at thousands of volts to the ground but should also hinder, if possible, the much higher voltage of lightning strokes.

Male sex characters will be brought under control in their development, and distressing abnormalities in behavior will be subjected to experiments looking toward their elimination from the human stock, as the result of discoveries made in Swiss and Netherlands laboratories, reported at the San Francisco meeting of the American Chemical Society by Dr. L. Ruzicka of Zurich.

The basis of his statement is the definite determination of the chemical composition of a male sex hormone isolated last June by the Netherlands scientist Prof. Ernst Laqueur. In the opinion of Dr. Ruzicka, the synthetic preparation of this hormone in sufficient quantities to provide ample material for studies of its effect in treating sexual abnormalities of male human beings, will be merely a routine matter requiring a few weeks or months.

This hormone is the second chemical messenger having to do with the development of male sex characters upon which Dr. Ruzicka has worked. The first was isolated from kidney secretion in 1931 by the German chemist Dr. M. Butenandt. In 1934, Dr. Ruzicka and his assistants succeeded in producing this hormone in the laboratory from cholesterol, a widely distributed organic substance found abundantly in the yolks of eggs.

Through the experimental material thus provided, it was possible to demonstrate that there must be two male sex hormones, one present in kidney secretion and the other in the sex glands themselves. The isolation of this second hormone proved to be difficult, partly because it occurred in such small quantities, roughly in the ratio of one part in a million of glandular tissue.

Comparison of the effect of the artificially produced hormone with that occurring naturally in the tissue of male sex glands indicated that the difference between them was more a matter of potency than of chemical nature. In the light of this and other findings, Dr. Ruzicka explained, he predicted the empirical formula of the second hormone and prepared some of it in the laboratory.

When Prof. Laqueur succeeded in isolating the naturally formed hormone from gland substance, he found that it conformed closely to the formula predicted by Dr. Ruzicka, and the natural hormone could be converted into the substance prepared by Dr. Ruzicka by a simple process of oxidation.