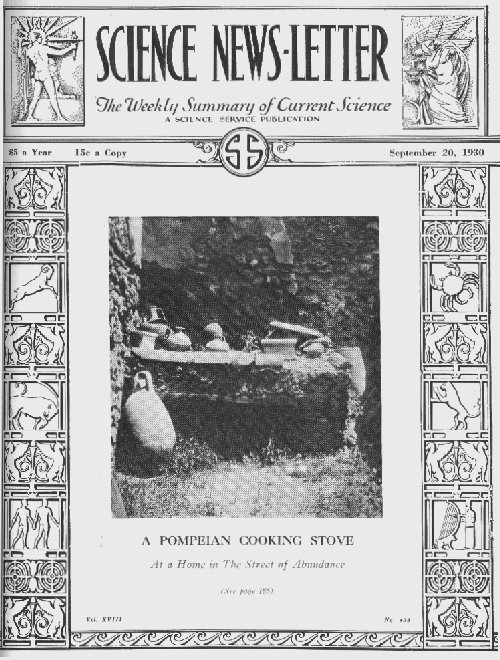 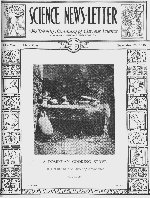 Pompeii and Herculaneum, most famous of tragic cities, are still showing the modern world new evidences of what everyday life was like 2,000 years ago. The new policy of excavators at Pompeii is to leave everything where it is found, if possible. The cooking stove shown on the cover of this week’s Science News-Letter is at a home in the Street of Abundance.

Grace and variety of form mark the pots and cooking utensils that accompany the old stove. Obviously, kitchen work in these Old World cities was made pleasanter by the artistry of the tools.

“The taste and skill of the metal-workers of Herculaneum and Pompeii is almost beyond belief,” declares Arthur S. Riggs, editor of Art and Archaeology, who has just returned from the scene of present excavations. “Every cooking utensil even was given its peculiar touch of beauty as well as useful form. Sauce-pans, skillets, pitchers, cups, ladles, lamps, knife handles, chains, everything of bronze or copper for use about stove or sink was lovingly worked into designs whose grace is only to be equaled by the most highly skilled silversmith work of the present. There were evidently no ‘Five and Ten’ stores in Herculaneum at which housewives could buy cheap kitchenware.”

THE POISON IN YOUR ANTIFREEZE

Will people get chronic or acute poisoning if wood alcohol is used generally as an antifreeze mixture for automobile radiators? This is one of the questions government scientists are trying to solve as a result of the proposal to introduce synthetic methanol as an antifreeze next winter.

Methanol, as wood alcohol is called by chemists, used to be made by distillation of wood. This made its cost high. By the new method, it is made by combining the deadly carbon monoxide with hydrogen, the raw materials being coal and water. This makes synthetic methanol very much cheaper than the product obtained by distillation. Whether it can be used safely in automobile radiators has yet to be determined.

MATERIAL OBJECTS SEEN AS HOLES IN SPACE BY BRITISH SCIENTIST

A new idea about the constitution of space was presented to science when Dr. P.A.M. Dirac, 25-year-old Cambridge physicist already famous in mathematical circles, announced to the British Association for the Advancement of Science at its recent meeting in Bristol his new theory that there is everywhere an infinite density of negative-energy electrons.

Gone is the idea that there is absolutely nothing in a perfect vacuum, for Dr. Dirac said: “A perfect vacuum is now to be considered as a region of space in which all the states of negative energy and none of those of positive energy are occupied.”

Everything that is material to us, all the material things of the universe, are made up of “holes” in this vast space sea of negative energy, according to Dr. Dirac’s theory. In other words, things that actually exist and can be experimented with have positive energy and can be considered to be vacant places in the space of minus or negative energy. In a way, this is a modern substitute for the ether.