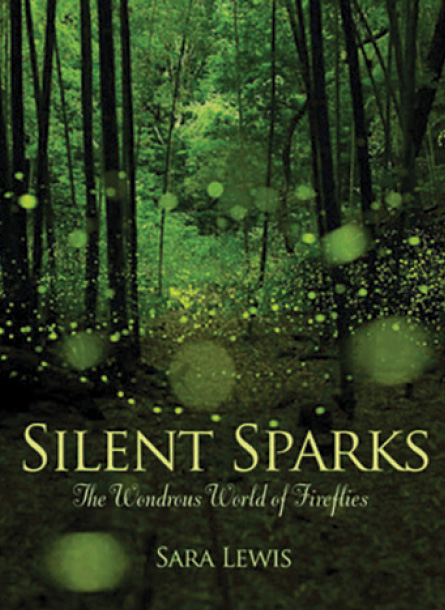 Kids are fascinated by fireflies. So are scientists, who, despite decades of research, are still perplexed by many of the mysteries posed by “lightning bugs.” In Silent Sparks, biologist Sara Lewis explores both the cultural and scientific fascination with these marvelous beetles.

Many creatures can manufacture their own glow, Lewis notes, but fireflies are some of the few that can readily turn their lamps on and off. Not all of the world’s nearly 2,000 firefly species light up as adults. But all of their larvae do, which suggests that the bioluminescence may have first evolved in a dinosaur-era ancestor as a “Don’t eat me! I’m toxic!” signal to predators. Only later would adults have co-opted this glimmer for the mating displays that most people are familiar with.

Some of the most impressive firefly shows involve the synchronous flashing of thousands of insects. Each mating season, these Christmas tree–like spectacles draw thousands of tourists to locales as diverse as Tennessee and Malaysia. Although researchers have a fairly good idea of how the fireflies synchronize their flashings — in some species, males continually adjust their flashing rate based on their neighbors’ activity — scientists still haven’t figured out why they do so.

Fireflies aren’t just pretty; they’re useful. For instance, food inspectors monitor food contamination by taking advantage of the chemical reactions that the insects use to signal their mates. These reactions occur only in the presence of ATP, an energy-storing chemical found in all living cells, making the glowing substances a keen detector for food-tainting bacteria such as Salmonella or E. coli.

Silent Sparks is at its best when Lewis describes her own experiences in the field, such as lying on her back on the forest floor while flickering fireflies wafted mere inches above her nose. For readers who would like their own experience, Lewis includes a field guide to the most common species found in the southeastern United States (the hot spot of North American firefly diversity).

So grab a copy of the book, along with a net, jar and kid you love, and relive fond childhood memories while inspiring a few new ones.

Buy Silent Sparks from Amazon.com. Sales generated through the links to Amazon.com contribute to Society for Science & the Public’s programs.