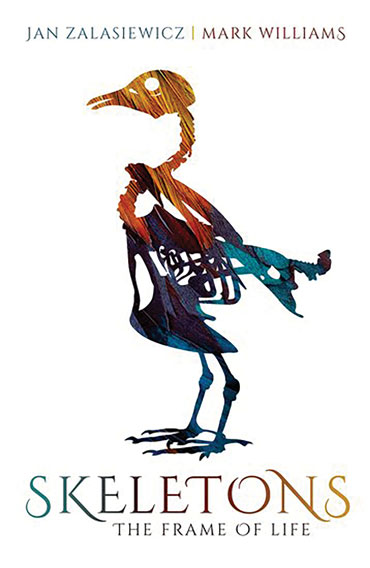 For much of life’s reign on Earth, organisms got by without skeletons. But since that innovation evolved about 550 million years ago, there’s been an evolutionary arms race of epic proportions.

One of the first competitors was Cloudina, a small seafloor creature whose exterior skeleton almost certainly evolved in response to predation: In well-preserved groups of fossils, up to a fifth of these critters’ exoskeletons show holes or other evidence of being attacked.

In the eras since, in response to predation and a wide range of other challenges, life has evolved a wild diversity of such structures, as described in the aptly named Skeletons. The book is another collaboration between paleobiologists Jan Zalasiewicz and Mark Williams, who previously wrote about oceans on Earth and other worlds (SN: 3/7/15, p. 29). As the authors point out, skeletons now take many forms and sizes, including the tiny carbonate and silicate shells secreted by marine microplankton and the giant frames of blue whales. The authors even make the case that wood — a rigid, biologically built material — is a sort of skeleton.

Zalasiewicz and Williams survey the various functions of skeletons. Exoskeletons, like those of Cloudina, often serve purposes besides body armor, acting as anchors for a creature’s muscles and other tissues. For the first animals that left the seas (and for many creatures living in arid environments today), an exoskeleton helped prevent desiccation.

External skeletons do have their disadvantages. For one thing, an animal like a spider or scorpion that’s fully enclosed in an exoskeleton must occasionally shed its armor as the animal grows, which temporarily leaves the creature vulnerable.

Taking another route, vertebrate animals evolved to grow their skeletons on the inside of the body. Some species, like whales and elephants, can grow to immense proportions but have had to develop different means of defending themselves.

Overall, the book provides a fascinating look at skeletons throughout the ages and into the future.

Buy Skeletons from Amazon.com. Science News is a participant in the Amazon Services LLC Associates Program. Please see our FAQ for more details.