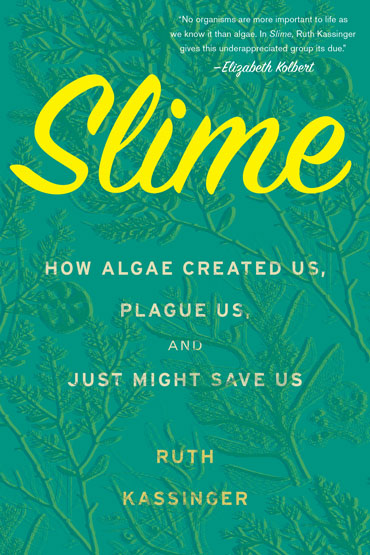 A slew of popular-science books have set out to convince readers that some overlooked, obscure or generally disdained category of thing is actually wildly important, whether it’s salt, garbage or beavers (SN: 8/4/18, p. 28). Slime, all about algae, is one of those books.

If you’re skeptical that algae can sustain such an argument, you’ll be surprised. Science writer Ruth Kassinger, an author of two books about plants, has found in algae an undervalued topic truly worthy of closer attention. These slimy organisms have shaped Earth for billions of years and continue to float into and out of our lives in myriad ways. Kassinger visits farmers, foodies, factories and fuel producers that are all dependent on algae. She weaves their stories into a picture of how algae serve not only as a base in the ocean’s food chain, but also as a rich source of useful molecules that people have only begun to harvest.

As for what precisely algae are, though, that’s a bit more difficult to say. While the word may conjure up a uniform film of bright green pond scum, the term has encompassed organisms ranging from cyanobacteria (once known as blue-green algae but now considered bacteria) and microalgae (in a rainbow of colors and more than 50,000 species) to seaweed that can tower as tall as a giant sequoia. Once classified as plants, algae are now known to be a grab bag of species defined as much by what they are not as by what they are. They’re not a true taxonomic group, like cats or fungi; they have no one common ancestor. Algae can’t even be defined as photosynthetic, since some have lost that ability.

It’s this diversity that makes algae so important. Kassinger begins her book with the story of cyanobacteria, bacteria that around 3.7 billion years ago were the first to harness the sun’s energy using a new form of photosynthesis. This radical invention added oxygen to Earth’s atmosphere and allowed life to proliferate. From there, Kassinger traces the evolution of multicellular life and the spread of algae onto land, where they partnered with fungi to form lichens. She shows how algae’s diversification in the sea led to today’s phytoplankton, corals and seaweed.

Kassinger hits her stride when she takes readers on a tour of algae-related sites around the world. In a section on algae as food, she meets farmers who harvest wild seaweed and a restauranteur who keeps alive the Welsh tradition of laverbread, a squishy green seaweed spread. She also introduces entrepreneurs taking a more high-tech approach to seaweed aquaculture. Next, she launches into the world of algae-derived products, learning how algae are transformed into fertilizers, food additives and even polymers that go into shoes.

And then there is algae’s complex role in our warming climate. Kassinger visits companies that have bioengineered algae to produce biofuels that one day may replace fossil fuels. She goes scuba diving to learn what’s killing the algal symbionts of coral, and what efforts might save them. Finally, she explores algae’s potential role in drawing down greenhouse gas levels. In the end, Kassinger has us rooting for pond scum — it might just save us yet.

Buy Slime from Amazon.com. Science News is a participant in the Amazon Services LLC Associates Program. Please see our FAQ for more details.