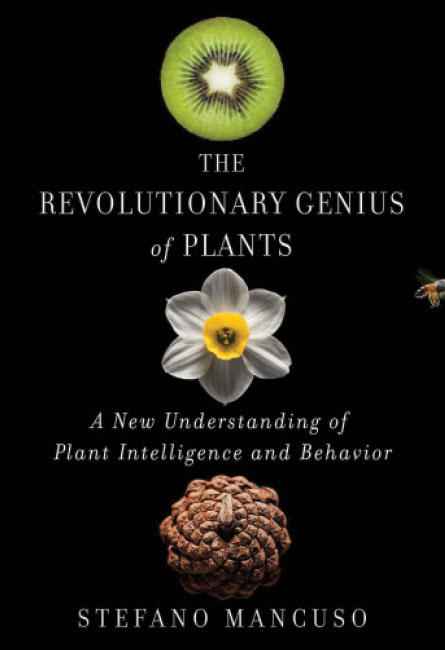 More than 200 years ago, French botanist René Desfontaines instructed a student to monitor the behavior of Mimosa pudica plants as he drove them around Paris in a carriage. Mimosa pudica quickly closes its leaves when touched — presumably as a defense mechanism. Desfontaines was interested in the plants’ response to the continuous vibrations of the ride. Initially, the leaves closed, but after a time, they reopened, despite the shaking. “The plants are getting used to it,” the student wrote in his notebook.

Stefano Mancuso recounts this tale in The Revolutionary Genius of Plants and reports on a modern follow-up: a repeat of the experiment (without the carriage) demonstrating that plants can indeed learn that an external provocation is harmless and remember what they’ve learned for weeks.

Learning is impossible without memory, and both are hallmarks of intelligence, argues Mancuso, who leads the International Laboratory of Plant Neurobiology at the University of Florence in Italy. But our animal-centric view of neuroscience makes us loathe to employ terms like “memory” and “intelligence” when talking about organisms without a brain. With infectious passion, Mancuso sets out to convince us that the plant way of doing things not only deserves our respect, but also may help us solve greater societal woes.

The M. pudica story sets the stage for an eye-opening philosophical argument that makes the book worth a close read — you will never look at plants, or animals, the same way again. To overcome the human bias toward brain-centered intelligence, Mancuso writes, one must consider that, unlike animals, plants can’t move.

Being anchored in one spot required that plants evolve entirely different solutions to short- and long-term threats like predators, fire and drought. (Animals do not solve problems, notes Mancuso, they avoid them.) The plant solution is decentralization: Rather than having a brain, kidneys or other organs that would be points of vulnerability, plants are modular. Functions that would be carried out by organs in an animal are instead distributed throughout the organism. A plant evaluates its environment with its whole body and responds appropriately.

Most people use words like “acclimate” or “harden” to describe this botanical evaluation and response. At the book’s outset, Mancuso makes a compelling and enthusiastic case that these terms throw shade, so to speak, on plants’ unappreciated smarts. Yet he soon veers into a discussion of plants’ remarkable adaptations. Natural selection favors such traits and tricks — a seed that propels itself into the ground, for example, or a succulent that avoids predation by disguising itself as a pebble — when they provide an evolutionary advantage, but require no intelligence to evolve.

Nonetheless, The Revolutionary Genius of Plants is a delightful read, and the examples of plant resourcefulness dazzle. Not only is the book rich in botany, Mancuso also includes historical anecdotes and contemporary examples of how taking a page from the plant approach has provided solutions to human problems. A chapter on the distributed intelligence of plant roots —akin to that of insect colonies and nerve cells in an animal brain — touches on democracy, Wikipedia and crowdsourced quantum physics. His stories have something for everyone: hot pepper aficionados, space enthusiasts and architecture buffs. There’s so much good stuff that you can almost forgive the book for not living up to the title’s promise.

Buy The Revolutionary Genius of Plants from Amazon.com. Science News is a participant in the Amazon Services LLC Associates Program. Please see our FAQ for more details.