“Then, abruptly, there’s the sound of gunfire,” said electrical engineer Robert Maher. “A big bang followed by another bang.”

Witnesses saw two shooters facing off, a few meters apart — one aiming north, the other south. But no one knew who shot first. That’s where Maher comes in. His specialty is gunshot acoustics, and he’s helping shore up the science behind a relatively new forensics field.

In the case of the two shooters, surveillance cameras missed the action, but the sounds told a story that was loud and clear.

A distinctive echo followed the first gunshot but not the second. The first gunshot’s sound probably bounced off a big building to the north, causing the echo, Maher concluded. So the first person to shoot was the person facing north, he reported May 24 in Salt Lake City at a meeting of the Acoustical Society of America.

Maher has analyzed the booming echoes of gunshots in dozens of cases, but he’s also studying the millisecond-long sound of a bullet blasting out of the barrel — and finding differences from one type of gun to the next.

He and colleagues at Montana State University in Bozeman erected a semicircular aluminum frame studded with 12 microphones, evenly spaced and raised 3 meters off the ground. When someone standing on a raised platform in the center of the contraption shoots a gun — a 12-gauge shotgun, for example, or a .38 Special handgun — the microphones pick up the sound.

“Each of the different firearms has a distinctive signal,” he says. His team is building a database of sounds made by 20 different guns. To the ear, the gunshots seem alike, but Maher can chart out differences in the sound waves.

The soundwaves created from firing two different guns differ as shown in the images. Microphones in front of the shooter can pick up the distinctive sound of the muzzle blast (made by the rapid combustion of gunpowder). Some guns, like the rifle, also make a mini sonic-boom because the bullet travels faster than the speed of sound. 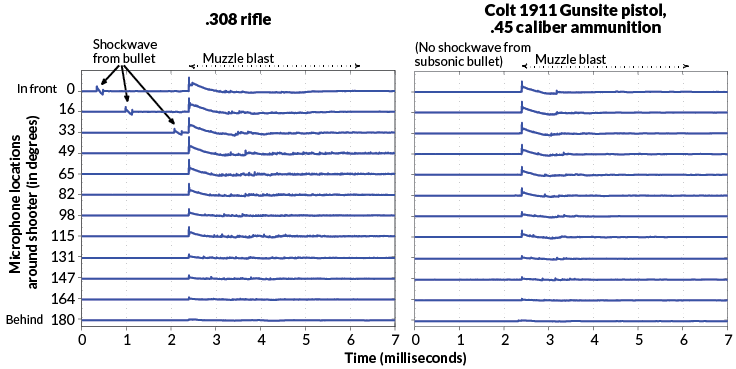 One day, investigators might be able to use the information to figure out what kind of guns were fired at a crime scene. Of course, Maher says, most crime scene recordings aren’t high quality — they often come from cellphones or surveillance systems. But his team will compare those recordings with ones made in his outdoor “lab” and try to figure out which aspects of crime scene audio they can analyze.

Maher, a music lover who plays the cello and sings in a choir, didn’t intend this career. “If I were really talented at music, that’s what I’d be doing full time,” he says. Instead, he has applied his skills in math and science to problems involving sound: studying humans’ contribution to noise in national parks, for example, and now, gunshot acoustics.

For him, it’s “a nice way to bridge the gap between the science and the sound.”