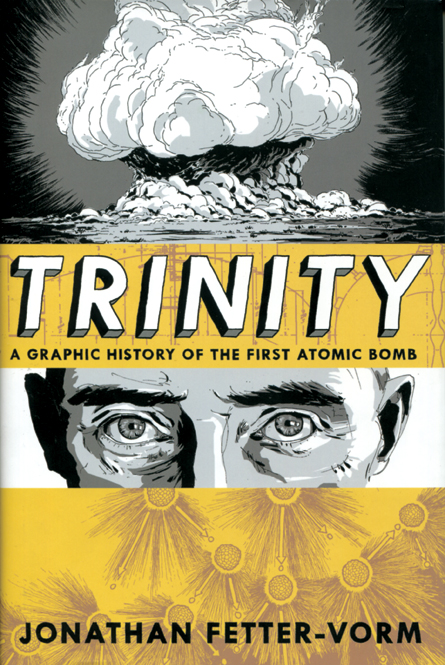 Others have already written the atomic bomb’s biography, and Fetter-Vorm doesn’t add new insights or historical scholarship. But he does provide a remarkably accessible — and frankly, beautiful — introduction to the events that ushered in the Atomic Age.

His graphic novel can’t be as thorough as the Pulitzer Prize–winning The Making of the Atomic Bomb by Richard Rhodes. Still, the thin hardcover presents the key events and introduces the major players. History is distilled into a series of snapshots in comic-book framing, featuring excerpts from notable conversations between scientists, generals and politicians.

The matter-of-fact text largely avoids taking sides or answering such questions. But the art is commentary in itself — not on the bomb’s impact on humankind, but on the majesty of the physics that made such a device possible. Illustrations of the subatomic world explain everything from the research that led to the first fission reactor to the radiation sickness that poisoned residents of Hiroshima and Nagasaki.

The main protagonist here isn’t a human; it’s the atom. While Rhodes ends the main body of his book on a note of fear — a Japanese doctor who wakes short of breath after a nightmare — Fetter-Vorm’s work closes with a meditative reflection on matter and energy. On the final page, radiation streams from a desert west of Los Alamos. The force of nature behind this radiation is “as innocent as an earthquake … as oblivious as the sun,” he writes. “It will outlast our dreams.”