Imagine if your best knowledge of human anatomy came from viewing the body through binoculars from a mile away. You might make out the shape of a hand, but knuckles and fingernails would elude you. Experiments could tell you there’s a pumping heart inside, but to see that heart with any clarity you would have to fix it in formaldehyde or liquid nitrogen, blast it with electrons and add dyes to impart contrast. For a long time, that’s what it’s been like for biologists trying to observe cells.

English scientist Robert Hooke coined the term cell in 1665 after examining a slice of cork through a light microscope. The plant parts he saw reminded him of the cells of a monastery. In the centuries since, we’ve learned that our bodies comprise some 200 different cell types and a total of several trillion cells, not counting microbes, at any given moment. (As you read this sentence, about 50 million have died and been replaced.) Within a single cell there may be 10,000 different proteins; thousands of the energy factories called mitochondria; and half a billion actin molecules, which provide scaffolding to support the cell and help it move and change shape. 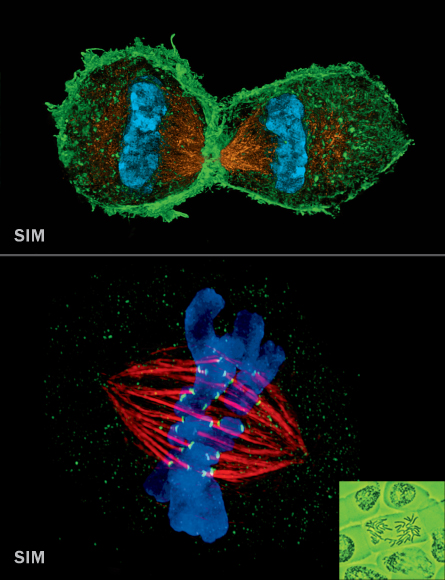 Mitosis, the cellular division that produces two genetically identical daughter cells, is perhaps the most fundamental process in biology. Without it, multicellular life wouldn’t exist, a broken bone would never heal, tissues would disintegrate. Cancer — essentially mitosis gone rogue — also wouldn’t exist. Scientists have been watching mitosis through a microscope for about 150 years, but new views are fleshing out the less-detailed pictures of the past (bottom, right). After DNA replicates, the nuclear envelope surrounding it dissolves. Spindle fibers (gold above, red at right) align pairs of chromosomes (blue) and then separate the genetic material into two daughter cells (shown forming, above).

The structures and activities within our cells are a major force in determining the stuff we’re made of, even though each of us begins with the humble fusion of just two. Following genetic instructions and taking cues from its environment, each cell realizes its fate — a fate that is inextricably linked to our own.

Until now this internal machinery has remained largely hidden from sight. Viewed through microscopes similar to Hooke’s, most cells are see-through and colorless; it’s hard to discern fine features. Due to diffraction, the bending of light, objects smaller than about 250 nanometers — the size of the smallest bacteria — are fuzzy when viewed through an optical microscope, if they can be seen at all. (Consider that most proteins are merely a few nanometers across.) This diffraction barrier, explicitly defined by German physicist Ernst Abbe in 1873, makes a smeared blur of much that happens in and on a cell.

That’s all changed in the last few decades. Scientists have developed a suite of new optical techniques that circumvent the diffraction barrier and show us a cell’s full guts and glory. With new fluorescent tags that light up structures in the dense darkness inside a cell these new optical approaches produce detailed images of what was once invisible. In the pages that follow, some of the most striking images are highlighted, all from animal cells that scientists use to understand basic cellular processes and disease.

By capturing the inner workings of a cell and interactions between cellular neighbors, scientists can now connect knowledge gleaned from genetic experiments to actual structures and activities they can see. Discoveries will lead to new hypotheses and experiments that will further our understanding of animal development and function — and how both can go awry.

Some of these super-resolution techniques are still so new and challenging that many scientists think the major breakthroughs they will yield are yet to come. But for now, we can all enjoy stunning, unprecedented views of the cellular world.

The nitty-gritty of cell biology happens on scales too small to see through a conventional light microscope. But several new imaging techniques at a range of resolutions provide new views — and new understanding — of how cells function. 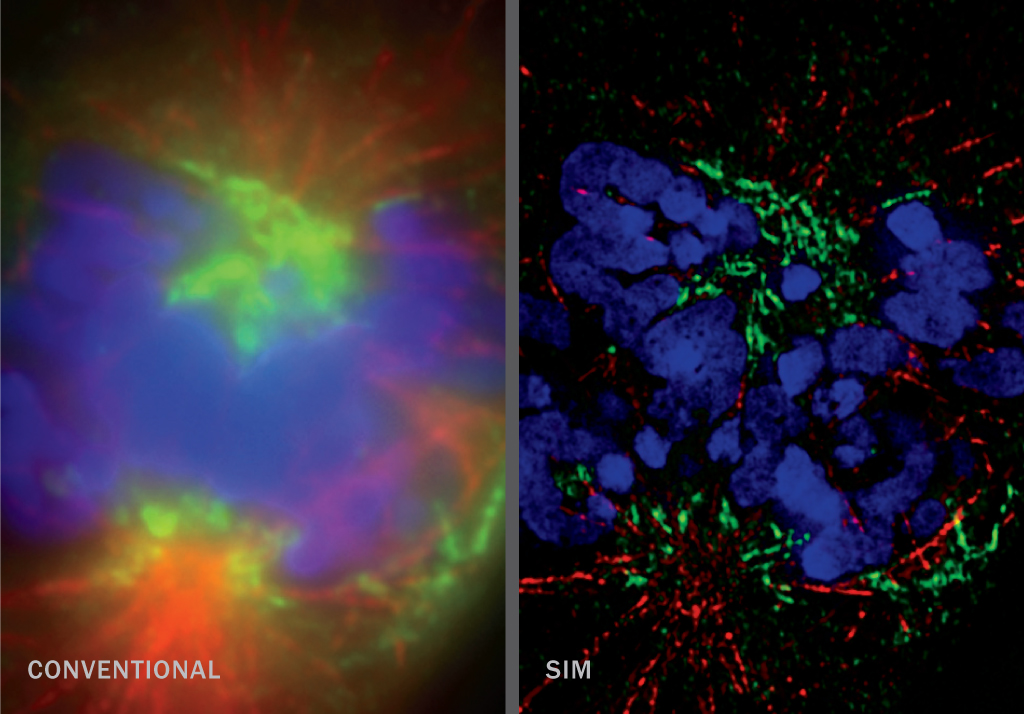 Structured illumination microscopy shines a striped pattern of light onto a sample. That light interacts with light from fluorescent tags on cellular material and generates a pattern of interference called a moiré fringe. Using a series of moiré fringes it’s possible to mathematically extract and reconstruct a super-resolution image. SIM is ideal for looking at entire cells in 3-D, ensembles of cells or multiple cellular structures at once.
SIM: Lothar Schermelleh, Univ. of Oxford 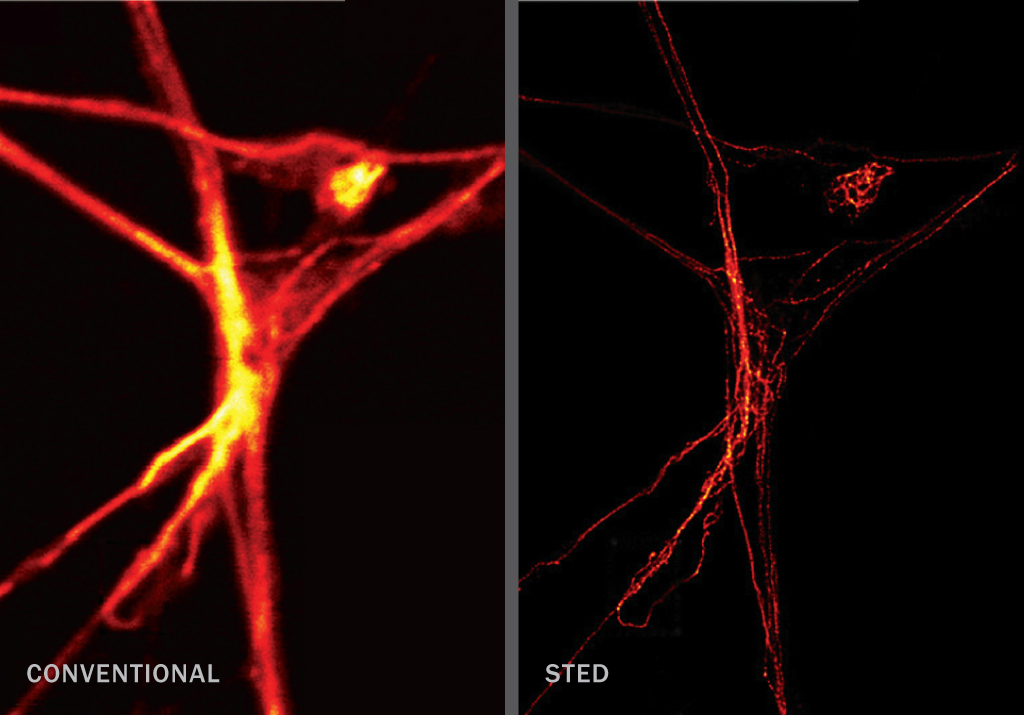 When a focused light beam hits a fluorescent-tagged specimen, it generates a blurry halo. With stimulated emission depletion microscopy, a second laser shines a doughnut-shaped beam of light that turns off the excited molecules in the halo. This provides a sharper view that, when scanned across the sample, produces a super-resolution image.
STED: R. Medda, D. Wildanger, L. Kastrup and S.W. Hell/Max Planck Institute 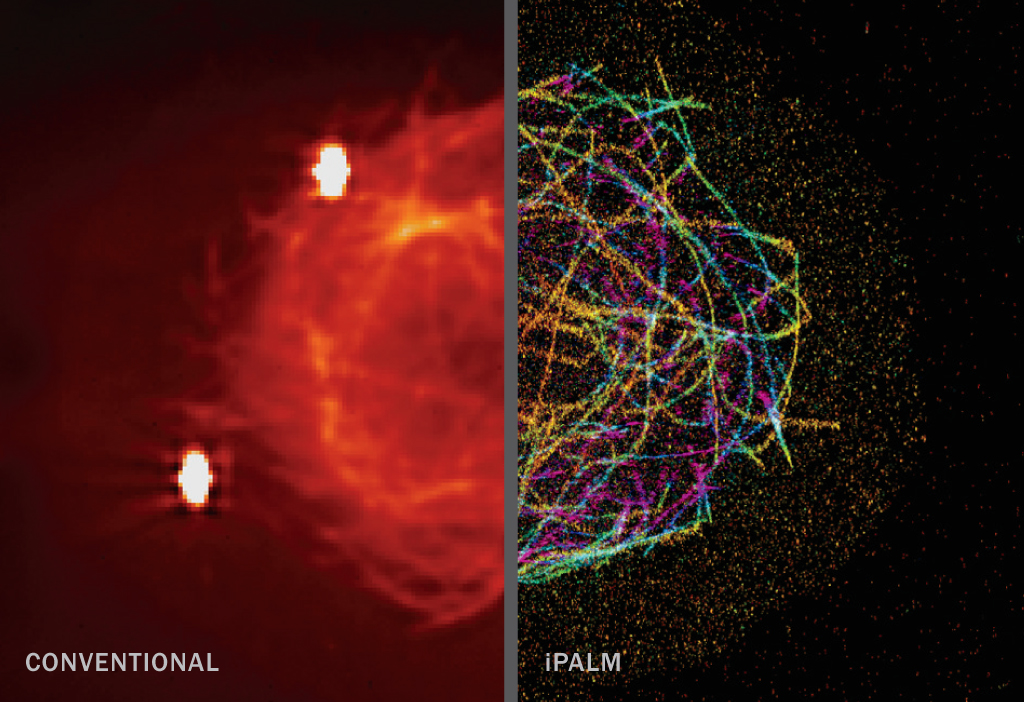 Photoactivated localization microscopy incorporates into a sample special fluorescent proteins that can be toggled between on and off states when hit with a particular wavelength of light. This allows researchers to illuminate a subset of molecules in a sample and eliminate overlapping fluorescence that would blur details if everything in the sample was lit up at once. iPALM (interferometric PALM) provides images in 3-D.
PALM: J.A. Galbraith, G. Shtengel, H.F. Hess and C.G. Galbraith/NINDS/NIH, Janelia Farm Research Campus/HHMI and NICHD/NIH 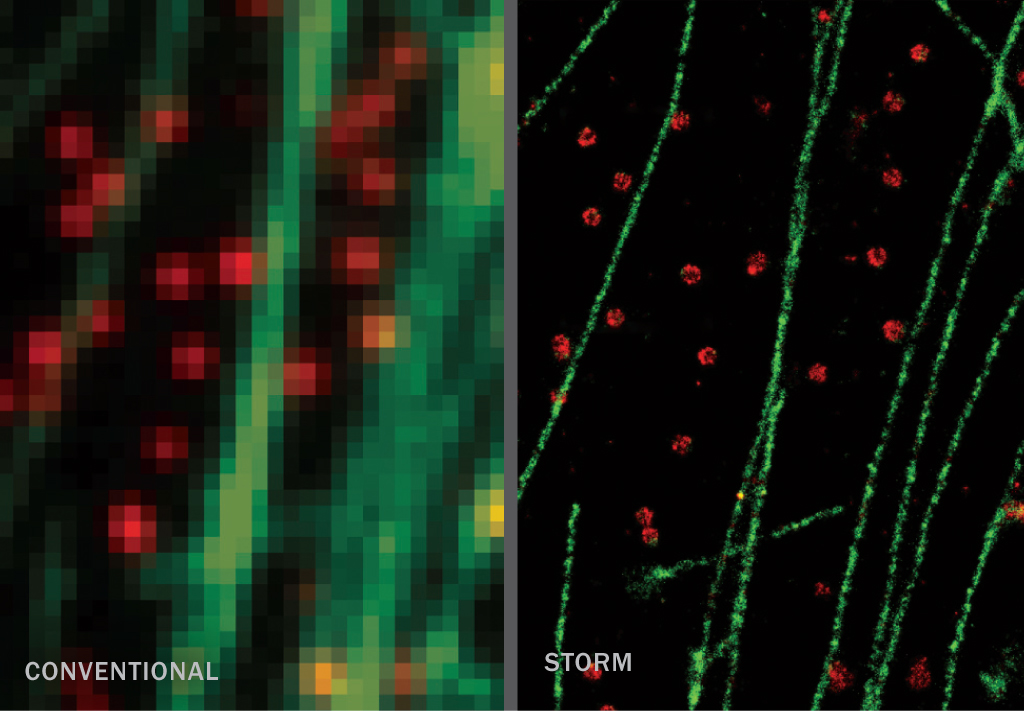 Stochastic optical reconstruction microscopy, developed around the same time as PALM, also relies on fluorescent tags that can be switched on and off. In STORM’s case, the tags can be dyes or proteins. Using dyes may require an extra step, but they can be switched on and off more quickly and don’t burn out as fast as fluorescent proteins. Dyes can also be attached to genetic material.
STORM: M. Bates et al/Science 2007 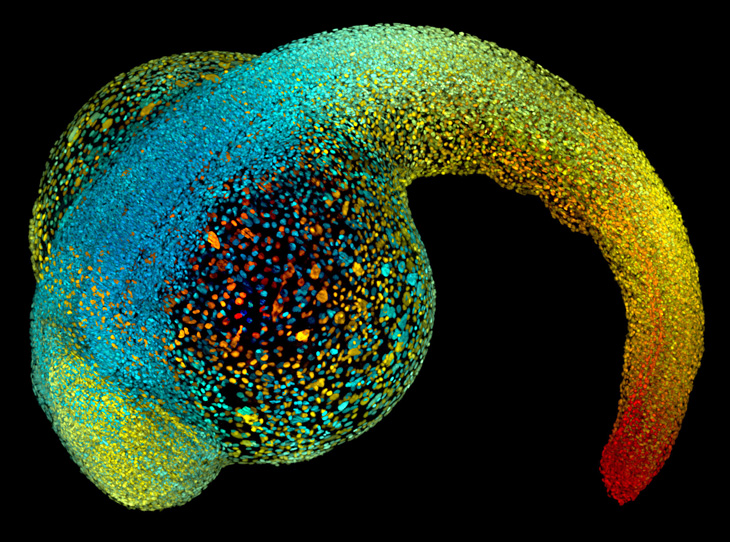 Imaging cells can be a violent process. The heat from light can cook cells, and the tinier the object the more light scientists need to see it (or to “interrogate” it). Light sheet microscopy hits a sample with a thin sheet of light that excites only the molecules in a single plane, minimizing damage. Bessel beam imaging uses superthin sheets of light to image live cells — and their innards — in action (see images, “A FLY IS BORN” and “SIGNED, SEALED, DELIVERED,” above). Simultaneous multiview light-sheet microscopy (see image, “PACKING IT IN,” in slideshow above) uses thicker sheets to track ensembles of cells. Light sheet: K. Branson, Y. Wan, W. Lemon and P. Keller/Janelia Farm Research Campus/HHMI