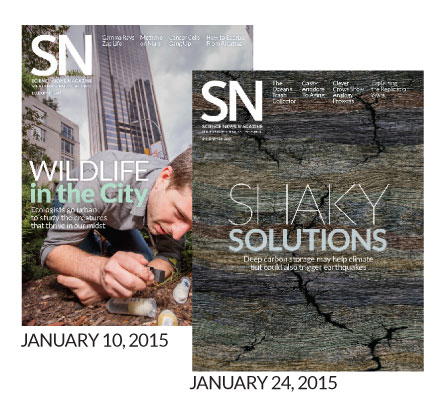 New evidence suggests that comets may not have delivered water to Earth. Water detected in comet 67P/Churyumov–Gerasimenko’s hazy atmosphere isn’t a chemical match for Earth’s oceans, as Ashley Yeager reported in “Ocean water may not be from comets” (SN: 1/10/15, p. 8).

The Rosetta spacecraft searched for a heavy form of hydrogen known as deuterium around 67P and found that the comet’s water had a deuterium-to-hydrogen ratio about three times as high as that of Earth’s water. “Might it not be true, though, that this comet and others have periodically had lighter molecules swept away by the solar wind as they have neared the sun and formed tails?” suggested Greg Skala. “Might that not mean that proportionally more heavy water gets concentrated over the eons, at least for those comets that orbit close to the sun? In the very same issue, in Thomas Sumner’s article ‘Solar wind may leach Mars’ air’ (SN: 1/10/15, p. 10), the process is discussed whereby gas molecules with heavier isotopes could get left behind.”

Mars sits in the inner solar system, where it has taken a constant beating from the solar wind for billions of years, says Yeager. Comets like 67P spend most of their lives in a deep freeze at the outer edges of the solar system, so their atmospheres have been largely untouched by the sun. Any differences in heavy and light elements are more likely to be influenced by how the comet was formed in the early days of the solar system, Yeager notes.

Most readers didn’t think much of this plan to put away carbon. “Really! Someone thinks injecting carbon dioxide underground is a good idea?” asked Nancy Patterson in an e-mail. “After all, it only makes the very ground upon which we build our homes, highways, bridges, nuclear power plants and railroad tracks unstable. What could go wrong?” For Paul Baker, the story “immediately brought to mind a favorite saying of John W. Campbell, the longtime editor of Analog Science Fiction and Fact magazine: ‘You can’t do just one thing.’ In other words, everything we do will have unexpected, unforeseen and/or undesirable consequences.”

But others believe that the project has merit. “Injecting CO2 into the ground seems problematic and expensive, but there is a lot to say for the all-of-the-above approach which pursues every option, even the more far-fetched ones,” argued commenter KokoTheTalkingApe.

In “The Imitation Game entertains at the expense of accuracy” (SN: 1/24/15, p. 28), Andrew Grant took a critical look at a new film depicting the life of mathematician Alan Turing.

The movie took some liberties with the historical events surrounding Turing’s role in cracking the German’s Enigma code during World War II. But some readers weren’t bothered by the discrepancies. “When people see movies such as this one, they expect inaccuracies or fabrications designed to increase the dramatic effect of the narrative,” wrote commenter WannabeTesla. “The important question to me is, ‘Did the filmmakers do Alan Turing  justice?’ I think they did, and his exposure via this film will probably inspire many to learn more about the real historical man. That’s a success in my book.”