The task was designed to scare the kids. One by one, adults guided children, ranging in age from 3 to 7, into a dimly lit room containing a mysterious covered mound. To build anticipation, the adults intoned, “I have something in here to show you,” or “Let’s be quiet so it doesn’t wake up.” The adult then uncovered the mound — revealed to be a terrarium — and pulled out a realistic looking plastic snake.

Throughout the 90-second setup, each child wore a small motion sensor affixed to his or her belt. Those sensors measured the child’s movements, such as when they sped up or twisted around, at 100 times per second. Researchers wanted to see if the movements during a scary situation differed between children diagnosed with depression or anxiety and children without such a diagnosis. It turns out they did. Children with a diagnosis turned further away from the perceived threat — the covered terrarium — than those without a diagnosis.

In fact, the sensors could identify very young children who have depression or anxiety about 80 percent of the time, researchers report January 16 in PLOS One. Such a tool could be useful because, even as it’s become widely accepted that children as young as age 3 can suffer from mental health disorders, diagnosis remains difficult. Such children often escape notice because they hold their emotions inside.

It’s increasingly clear, though, that these children are at risk of mental and physical health problems later in life, says Lisabeth DiLalla, a developmental psychologist at Southern Illinois University School of Medicine in Carbondale. “The question is: ‘Can we turn that around?’”

Maybe, says Joan Luby, a psychiatrist at the Washington University School of Medicine in St. Louis. Luby’s research has shown that treating preschoolers with depression helps the youngsters feel joy again, at least in the short term. “When you identify young children early” as needing help, Luby says, “you can treat them better.”

Sensors reveal that anxious and depressed children turn farther away from a perceived threat than healthy children. The difference between where the children are supposed to be going and where their body is turned is known as the yaw angle.

How kids react during an anxiety-inducing task 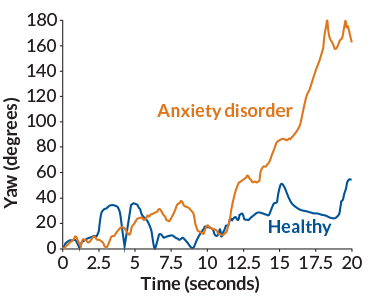 Few experts believed young children were capable of experiencing depression or anxiety until 1980, when researchers found that children as young as 7 could indeed get depressed. By the 1990s, it was clear that depression and anxiety could start in children as young as age 3. But for many children, the symptoms of depression show up in seemingly unrelated ways, such as aggression, difficulty eating or hyperactivity. As a result, these so-called “internalizing disorders” are more likely to go undiagnosed in the younger years.

Though estimates vary widely, some 10 to 20 percent of preschool- and kindergarten-age children are thought to suffer from an anxiety disorder and about 2 percent from depression, with some even expressing suicidal feelings. The real rates, though, are likely higher. Because children under age 8 or so cannot articulate their own feelings, clinicians must rely on caregiver accounts of a child’s behavior. But children with anxiety or depression are often so quiet and unobtrusive that caregivers and teachers overlook their difficulties.

These kids “are not the squeaky wheels,” says Ellen McGinnis, a clinical psychologist at the University of Vermont Medical Center in Burlington.

She and others have focused their research on finding objective ways to identify children with such conditions. This research can be laborious and time-consuming. As a graduate student, McGinnis recorded children during the snake or other similar anxiety-inducing tasks. Multiple research assistants would then evaluate those videos to gauge the children’s reactions. It took McGinnis two years to assess 10 children. “I was like, ‘This is ridiculous,’” she recalls.

So she teamed up with her husband, UVM biomedical engineer Ryan McGinnis, to find a faster, better way to identify children with depression or anxiety. The result: The pairing of the classic snake anxiety test with a commercially available motion sensor.

Of 63 children recruited to take the test, 21 had been diagnosed with anxiety or depression following a 90-minute interview between a trained clinician and caregiver — the current gold standard for assessment, says Ellen McGinnis.

In the snake test, the researchers found that the most telling moments picked up by the sensors came from the 20 or so seconds of anticipation leading up to the reveal. When faced with the covered terrarium, children with either anxiety or depression turned their bodies up to 180 degrees away from the scary object. “Children that had a diagnosis turned further away from this potentially threatening situation than kids who didn’t,” says Ryan McGinnis.

He was surprised that, after the big reveal, the sensors detected no difference between children with and without a diagnosis. “It surprised me how many kids were super excited to see the snake,” Ryan McGinnis says.

The researchers were able to use the sensor data to correctly flag 14 of the 21 children. The rate of false positives was also low, with the sensors categorizing only five children without a clinical diagnosis as having depression or anxiety.

That’s not gold standard, the researchers say, but it’s better than a widely used questionnaire in which parents report their child’s problems. The Child Behavior Checklist correctly identified only eight of the 21 children with diagnoses.

Because the task was simple and the sensor technology easily accessible (the unit price is less than $4 and the components needed to measure body motion are already present in most mobile phones), Ryan McGinnis thinks coupling technology with behavioral tasks has enormous potential. “You can really deploy something like this for universal screening,” he says.

But inducing fear, as in the snake task, relates more to anxiety than depression, says Sara Bufferd, a clinical psychologist at California State University San Marcos whose research also focuses on identifying preschoolers with internalizing disorders. Bufferd would like to see if the sensors would work on kids during a task that heightens feelings of sadness, helplessness or frustration. “I’m not sure whether responses to a task like that would induce motion in the same way as the fear task,” she says.

Many researchers working to identify children with mental health problems early are also following those children for years. That way they can see if and how such early mental health problems carry over to later life. In 2014, Bufferd and her team showed that children with depressive signs at age 3 were more likely to be depressed three years later. Related research on older children has shown similar continuity.

New research now shows that very young children with mental health problems may also be prone to more physical health problems in adolescence. From 1994 to 2001, DiLalla measured internalizing behaviors in 326 children at age 5 using the Child Behavior Checklist. Though the kids showed some signs of depression and anxiety, their behaviors did not reach clinical levels.

In a Jan. 25 study in Frontiers in Psychology, DiLalla and lab member Matthew Jamnik report that children with higher rates of internalization at age 5 were about 30 percent more likely to suffer from physical health problems, such as bad sleep, headaches and stomachaches seven to 12 years later, with varying rates for gender and temperament. Those with higher internalization scores in their early years were also about 30 percent more likely to eat mindlessly in adolescence. Mental health at age 5 impacts physical health later in life, Jamnik says.

With evidence mounting that mental health problems in preschool carry over into adulthood, researchers have begun looking into treating the very young. Work out of Luby’s lab, which focuses almost exclusively on preschool depression, is indicative.

In 2016, Luby showed that children with depression reacted less to rewards than their peers without depression. Her team hooked 78 children ranging in age from 4 to 7 to an electroencephelogram (EEG), a non-invasive machine that measures electrical activity in the brain. Fifty-three of those children had been diagnosed with depression.

When children with depression were hooked up to a machine that measures electrical activity in the brain (through little electrodes placed around the skull), their striatums — the part of the brain that activates during a reward — lit up less than those of healthy children.

The children played a guessing game on a computer. Children who gave more correct answers, as indicated by a green, upward facing arrow (compared to a red, downward-facing arrow for the wrong answer), gained more points and ultimately better prizes. The EEG revealed that even after choosing correctly, the depressed children showed less brain activity than their healthy peers — a sign that their responses to rewards were muted, Luby reported in October 2016 the Journal of the American Academy of Child and Adolescent Psychiatry. Similar inhibited responses to rewards have been linked to depression in adolescents and adults.

Meanwhile, Luby also studied children receiving a modified form of an established psychotherapy known as Parent-Child Interaction Therapy, or PCIT. In this early intervention for children with behavioral problems, a therapist coaches caregivers on how to help children manage disruptive behaviors and tantrums. The therapist observes the parent and child through a one-way mirror and communicates with the adult through a mic in the ear. Similarly, in Luby’s study, preschoolers and their caregivers followed the PCIT setup but with a focus on reducing the feelings of guilt and shame that tend to accompany depression.

But will that newfound joy carry over into later childhood and even the angsty teen years? Luby hopes she’ll have some answers once those kids grow old enough.