Age was all the rage this year, as headlines about a provocative study blared what many people already suspected: People grow old at vastly different rates.

The study, out of Duke University, analyzed the health of nearly one thousand 38-year-olds and found that some resembled people a decade older while others appeared years younger (SN: 8/8/15, p. 10). Researchers determined this “biological age” based on health indicators such as body mass index, blood pressure and cholesterol level. The finding tapped into a mystery that has long captivated scientists and the public alike — “why some people can live to 120 with no disease, and others are already in bad shape at age 70,” says molecular biologist Martin Hetzer of the Salk Institute for Biological Studies in La Jolla, Calif.

A handful of recent studies have offered some tantalizing clues. Molecular mayhem within cells, scientists suggested this year, may lie at the root of aging. After examining populations of proteins in the brains and livers of rats, Hetzer and colleagues reported in Cell Systems that long-lived brain proteins appear to become damaged over time. “These are proteins involved in essential cellular functions,” Hetzer says. Unlike liver cells, brain cells rely on proteins that can survive for an animal’s lifetime. Some of those proteins help control messages that pass between brain cells, for example, while others help keep the cell organized. The breakdown of these proteins could be a key driver of aging, Hetzer says.

Though they were all 38 years old, New Zealanders participating in a study reported this year differed in their biological age, which researchers determined based on various health indicators. 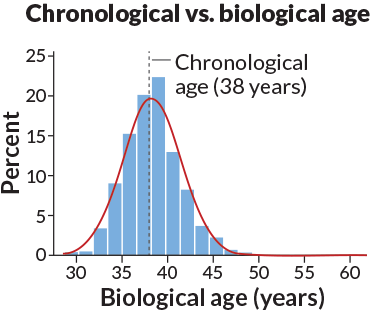 As could the unraveling of cells’ DNA, a study in Science suggested. In healthy young people, long stretches of DNA pack tightly together in neat bundles called heterochromatin. These bundles aren’t packaged quite so well in old people, researchers comparing DNA from the teeth of young and old people found (SN: 5/30/15, p. 13). The researchers originally identified the disorganization of DNA bundles in people with a premature-aging disorder known as Werner syndrome. The change in the 3-D architecture of the genome gives proteins easy access to stretches of DNA that are supposed to be tucked away.

Beyond the deterioration of proteins and DNA packaging, the body may age when essential barriers break down. When young stem cells in the brain divide, they build a wall that sequesters junky proteins into daughter cells. (This junk mucks with cellular machinery, a problem for stem cells churning out new brain cells.) But old stem cells aren’t so tidy, scientists reported this year in Science (SN: 10/17/15, p. 10). Old stem cells in the brain had worn-out walls inside an organelle called the endoplasmic reticulum. These weakened walls let cellular junk seep back in during division, cutting down on the stem cells’ ability to produce new cells.

Another protective wall, the blood-brain barrier, might also waste away with time. Usually this barrier guards the brain from dangerous toxins in the blood. But MRI scans measuring barrier permeability in living human brains found that old people had leaky walls around the hippocampus, a structure involved in learning and memory (SN: 2/21/15, p. 8). Researchers linked the leaky walls to damage to pericytes, cells found within the blood-brain barrier and crucial to its formation.

Differences in barrier integrity also showed up among old people. Those with learning and memory problems had more pericyte damage than healthy individuals of the same age, Berislav Zlokovic of the University of Southern California in Los Angeles and colleagues reported in Neuron . Breakdown of this brain barrier may kick off some of the cognitive troubles of old age, the authors proposed.

All in all, scientists continue to chip away at the mysteries of growing old. The molecular events identified this year add to previously discovered signs of aging — the shortening of telomeres, the protective caps on chromosomes, for example, and damage to mitochondria, the energy factories of cells. But the picture isn’t complete, or simple. Big questions remain, including how to distinguish healthy aging from disease, as well as the roles of genetics versus environment.

The next major challenge, Hetzer says, will be figuring out which cellular changes are merely a sign of aging and which changes are driving it.  Understanding these details could help scientists design antiaging drugs, says geroscientist Felipe Sierra of the National Institute on Aging in Bethesda, Md. “How we age is something we can control,” he says. “Trying to convince people to exercise or eat better has not worked, so we need an alternative.”

One day, doctors might prescribe drugs that fight aging, just like prescribing drugs for diabetes or high cholesterol. Now that sounds like a story that would make some headlines.