West Africa’s 2014 Ebola epidemic demonstrated what can happen when a contagious virus emerges amid a population served by a broken medical system, and where cultural practices, public fears and porous borders fuel the spread of disease.

The outbreak also laid bare an inadequate scientific understanding of the Ebola virus. By the time the World Health Organization and others mobilized to confront the crisis in the middle of the year, public health workers in the field had already started to fall far behind Ebola’s spread. Scientists scrambled to determine how it operates once inside the body.

With only animal studies to go on, researchers also had to pursue a crash course in vaccine and drug testing to get products into the field quickly to fight a virus that has no cure. This unorthodox approach rapidly gained consensus as the death toll mounted. 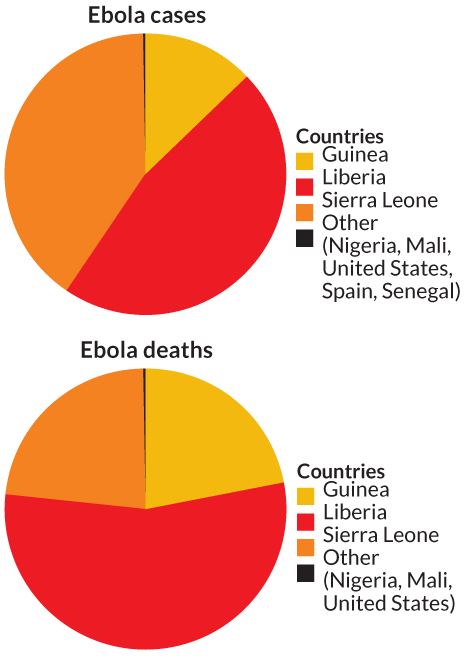 Ebola struck several West African nations, and even reached Spain and the United States, this year. But Guinea, Liberia and Sierra Leone were hardest hit.

Although Ebola has been recognized as a dangerous pathogen since it first surfaced in 1976, in the past it had caused mainly rural outbreaks that fizzled out on their own. Not this time. Arising at a crossroads of Liberia, Sierra Leone and Guinea, the outbreak jumped from that remote region to spawn stray cases in Europe and North America. The arrival in Dallas of a visitor from Liberia who was diagnosed with Ebola and later died underscored the global nature of infectious diseases today (SN Online: 9/30/14). As of early December, the epidemic had claimed 6,346 lives and infected at least 17,834 people — more than all previous Ebola outbreaks combined over 38 years. Roughly 35 percent of infected people have died.

Ebola is a fearsome hemorrhagic virus that spreads through contact with bodily fluids. The illness shows up as fever, headache, vomiting and weakness caused by leakage from blood vessels. Patients experience severe internal bleeding and can lose more than five liters of fluids a day.

The Dallas case led to speculation about whether Ebola could go airborne. But researchers had reported in July that monkeys don’t pass Ebola to each other through the air, indicating that it is extremely unlikely that people do (SN: 9/6/14, p. 7). Ebola’s natural reservoir isn’t known, but fruit bats are suspected since they carry the virus (SN Online: 8/11/14).

By sequencing the genome of viruses isolated from 78 patients, researchers traced the strains responsible for the current epidemic to a 2004 outbreak of Zaire ebolavirus in Central Africa (SN: 9/20/14, p. 7). How the virus crossed the continent without triggering an outbreak en route is unclear.

To get a handle on why some people survive infection, scientists compared mice resistant to Ebola with those susceptible to it and discovered that a gene in charge of blood vessel leakiness might play a part in the disease’s severity (SN Online: 11/5/14). Another study, published in mBio, found that the Ebola virus can edit its genetic material, adding extra RNA building blocks. These changes may affect how the virus grows in humans (SN Online: 11/4/14).

Ebola has always been stealthy, with outbreaks appearing and then melting into the jungle. In West Africa, officials found that having forewarning helps. After the epidemic began, nearby countries were on high alert, and a small outbreak in Nigeria caused by a sick traveler from Liberia was vanquished by October thanks to prompt isolation of sick individuals and monitoring of hundreds who might have been exposed. 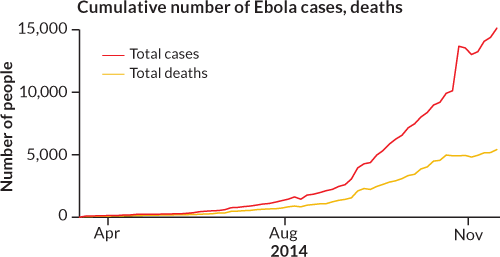 The Ebola epidemic has infected more people than all previous known Ebola outbreaks combined (cases in Guinea, Liberia and Sierra Leone shown). Declines are due to revisions in the case counts.

Nigeria’s actions offer hope. “It’s proof that this disease can be stopped in its tracks, using tried-and-true infection control and public contact tracing methods,” says Jeffrey Duchin, an epidemiologist at the University of Washington in Seattle. An unrelated outbreak in rural Democratic Republic of the Congo flared in August and by November was extinguished using this approach. But it killed 49 people first.

Transmission control was lacking early in the West Africa epidemic. Many sick people refused treatment, staying home and unwittingly infecting their families. Traditional burial customs, including touching the bodies, spread the virus to the living. Rumors emerged that foreign workers were spreading the disease. Without any drugs or vaccines to offer and with inadequate IV fluid replacement and disinfectant supplies, health care workers were underequipped to handle overwhelming caseloads.

A sick person can shed the virus for weeks. The intense risk of fluid contact became clear when some health care workers wearing biohazard suits fell sick. The specific exposure route in these cases is rarely traceable to a needle stick or another obvious breach, says Daniel Bausch, a Tulane University physician who worked with people who became infected despite precautions. “It’s much more subtle than that,” he says. “You touch something and scratch your eye or adjust your mask.” And that’s it.

In response to these dire conditions, WHO and others delivered makeshift clinics, protective suits, cleaning products, lab equipment and other supplies. They also sanctioned use of untested drugs in a few Ebola patients starting in August. But supplies quickly ran out, and the results shed little light on the prospective drugs’ value. By December, regulators were finalizing plans to deliver several experimental Ebola drugs to patients while gauging the compounds’ effectiveness. Antibodies from survivors’ blood are being used as a treatment option as well. And vaccine testing in healthy people had set the stage for use in the field (SN Online: 11/26/14).