Add dodging death, flirting and mothering to the tasks artificial light can discombobulate in wild animals.

Street lights take away the street smarts from normally wary moths, researchers reported this year. When bathed in LED illumination, free-flying moths are less likely to plunge or spiral downward at the sound of an incoming predatory bat (SN Online: 8/4/15).

Artificial illumination also misleads female cabbage moths into skimping on production of their usual sex pheromone lure. Instead they make an odd blend with too much of the components that repel rather than seduce (SN: 6/13/15, p. 9).

Even if partners harmonize, timing can go wrong later. Ample lighting appears to distort the day-length cues that alert Tammar wallabies to changing seasons. Many of the wallabies roaming a well-lit Australian naval base mate later than normal, and those delayed mothers miss the usual peak season for birth. Later, they struggle to meet their joeys’ greatest demands for milk because plants are already drying up (SN: 10/31/15, p. 6).

These tallying troubles are just for terrestrial animals so far. Researchers are also calling for increased attention to what artificial lighting does in the sea. 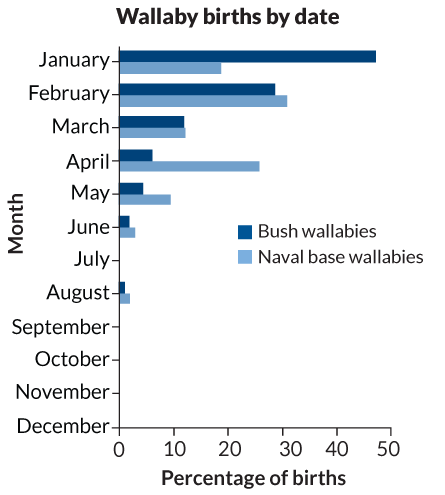 For Tammar wallabies exposed to artificial light at night, birthing peaks in February, a month later than normal. Moms with joeys born too late face food shortages as greenery fades.

Source: K. Robert et al/Proceedings of the Royal Society B 2015