This image might have you thinking twice before knocking.

A new map called “The Patina of Feces” shows that the outer door frames of American homes wear a thin veneer of microbes that are normally found in animals’ guts. Given that the microbes had to leave those guts to travel door to door, they probably came from someone’s, or something’s, poop.

“No reason to freak out,” says project coleader Noah Fierer of the University of Colorado Boulder. We already knew that fecal bacteria are floating around in the air, and we know that we’re breathing them in all the time. They probably aren’t causing any health effects, for the most part.

One does wonder, though, about those hot spots, shown appropriately in brown. Fierer and his colleagues are still trying to figure out why doors in some places, notably north Texas, Arkansas and Missouri, have so much fecal matter. “Our current hypothesis is that these patterns are driven by proximity to livestock and, in part, by climate parameters,” Fierer says. Dry, windy places may have more fecal-laden dust moving around. 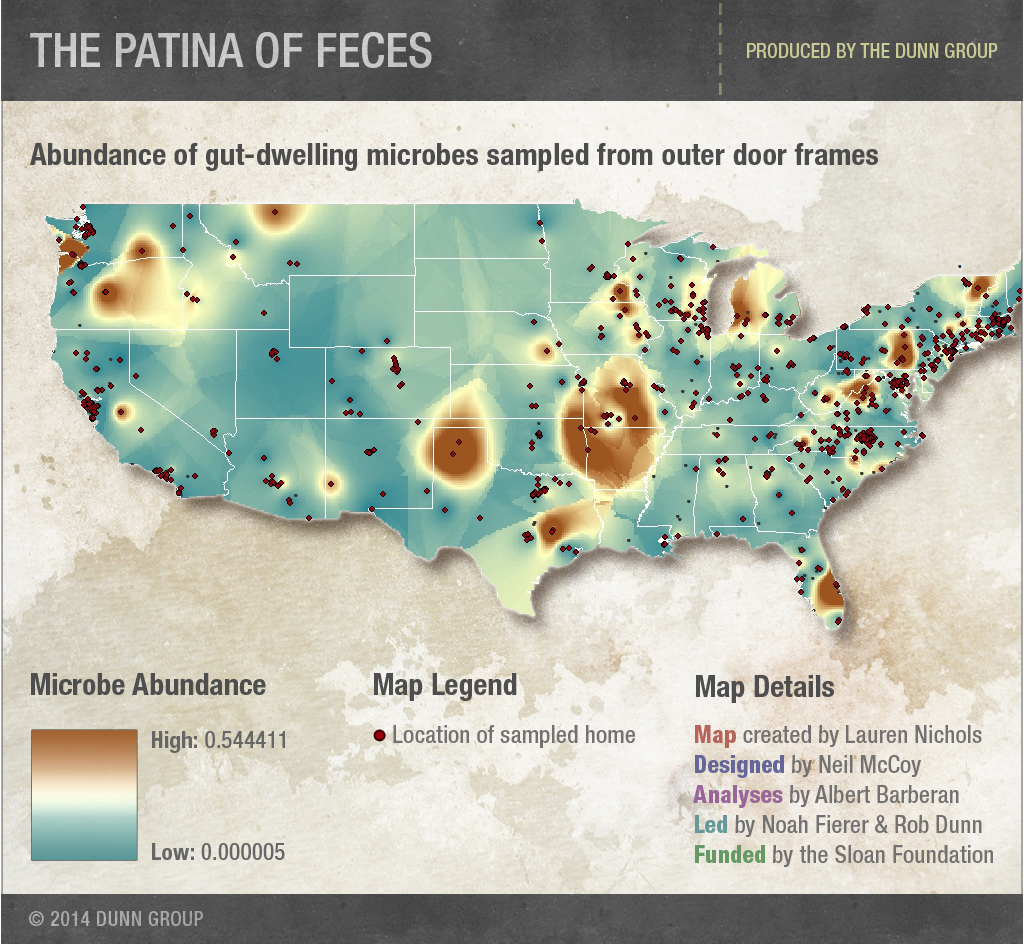 About 1,000 houses were sampled for the map, and almost all of them had some level of fecal bacteria. But the team still has a lot of work to do to figure out where the bacteria came from and whether the hot spots are real. The Texas panhandle, for example, may or may not be particularly poopy based on the two houses sampled. (No comment.)

As for the source, “some is surely human, much of it though might come from pigs, cows, chickens, squirrels or who knows what else,” Rob Dunn of North Carolina State University, who led the project with Fierer, writes in a blog post announcing the results. Urban areas also tend to have a lot of airborne dog poop, Fierer reported in 2011.

Fierer and Dunn study the microbes on and around us in our daily lives. It’s all part of a project called Your Wild Life that’s examining the biodiversity of everything from armpits and belly buttons to the insects living in our homes.

Some may say they’re happier not knowing these things. I think, though, that this provides a useful perspective on the world. It’s good to know that Stanford microbiologist Stanley Falkow was right when he reportedly said, “The world is covered in a fine patina of feces.”