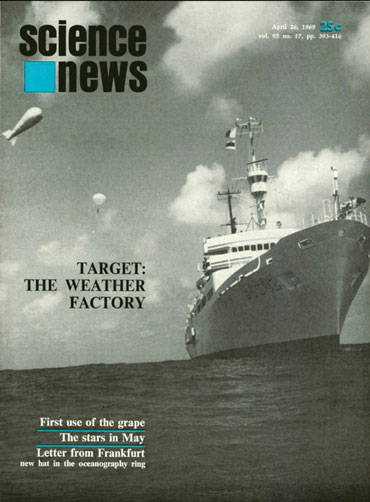 In 1964, a few radioactive atoms existed for three-tenths of a second in a Soviet laboratory, and G.N. Flerov and his colleagues, who detected it, announced the discovery of element 104. But the announcement was met with skepticism in the United States.… Now, U.S. scientists declare they have gone their own route to corral the elusive element. — Science News, April 26, 1969

Chemists in the United States and Soviet Union bickered for decades over who deserved discovery credit for certain elements beyond fermium, element 100 on the periodic table, with each side assigning the elements different names. Known as the Transfermium Wars, the Cold War–era dispute wasn’t settled until the International Union of Pure and Applied Chemistry stepped in and assigned names in the 1990s. Recently, U.S. and Russian scientists combined forces to discover three of the periodic table’s four newest elements (SN: 3/2/19, p. 16). The table now stretches past element 104, rutherfordium, to element 118, oganesson, at the end of the table’s seventh row (SN Online: 2/12/18).