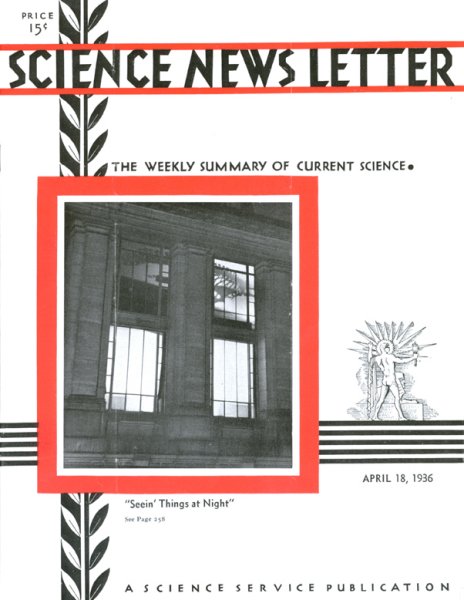 Scary folk, who shiver at skeletons even in broad daylight, had best keep away from the neighborhood of museums at night. Else they may be treated to a view of a spooky-looking array of bones apparently suspended by magic in the lurid light within. Actually, of course, the thing is nothing but the skeleton of some sea creature hung from the ceiling to spare floor space. The picture was taken through the windows of the U.S. National Museum in Washington.

IMPORTANCE OF HEREDITY AS CAUSE OF CANCER STRESSED

The importance of heredity or of constitutional factors in the causation of cancer was stressed at the meeting of the American Association for Cancer Research at Boston, Mass.

Failure to nurse one’s young, for example, causes breast cancer only when there is a constitutional tendency to the disease. This was brought out in studies on mice reported by Dr. C.V. Green and Elizabeth Fekete of the Roscoe B. Jackson Memorial Laboratory, Bar Harbor, Maine.

Cancer-susceptible individuals may be those having a constitutional tendency to grow old, physiologically, at an early age. Studies of the blood in cancerous mice suggest this possible linking of cancer with the aging process, Dr. Leonell C. Strong of Yale University School of Medicine reported.

A defect in the supply of hemoglobin, the oxygen-carrier in circulating blood, was found by Dr. Strong in mice with a known hereditary tendency to cancer.

“This defect is probably hereditarily determined,” Dr. Strong said. “The precocious drop in hemoglobin reflects possibly a premature aging involution process in those mice which are more susceptible to develop spontaneous cancer.”

From his own and other studies, Dr. Strong concludes that susceptibility to spontaneous cancer is not controlled by a single genetic determiner and that cancer of any part of the body is the result of many influences within the body. The mechanism that controls the start of cancer is, however, not entirely genetic or constitutional.

The relation between breast cancer and nursing was found by experiments on two groups of mice. One group was of a strain highly susceptible to develop spontaneous breast cancer. The other group was from a strain in which such cancers practically never appear. When the females were 10 days old, before the breasts had developed, the nipples on one side were sealed permanently without injuring the glands. When the mice bore young, they could therefore nurse from only one side, although the breasts of both sides secreted milk.

As a result, milk stagnation occurred, a condition which has sometimes been suggested as a possible cause of cancer in human mothers. This condition apparently did cause cancer in the mice with the strong hereditary tendency to the disease. More than seven times as many females of the cancer-susceptible strain developed breast cancers on the blocked side as on the untreated side, and the cancers appeared, on the average, two-and-a-half months earlier than on the untreated side.

In the mice of the cancer-resistant strain, however, no female whatever developed cancer. This finding seems to give further evidence of the importance of the hereditary factor.

The slowing of cancerous growth in mice by a sulfur-containing compound was reported by Dr. Stanley P. Reimann of the Lankenau Hospital, Philadelphia. The results obtained with this compound do not mean that a chemical cure for cancer has been found or that cancer can or will be eradicated by simply retarding its growth by chemical treatment, Dr. Reimann emphasized.

The results are significant, however, because the chemical that slowed the growth of the cancer is derived from a naturally occurring chemical compound which itself probably takes part in natural growth processes within the body.